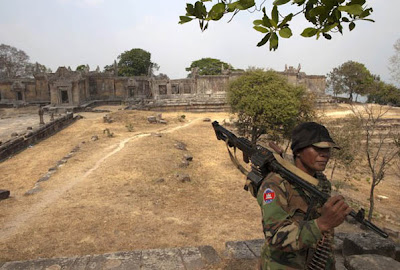 A Cambodian solider stands guard along the grounds of the ancient Preah Vihear temple on February 9. (Photo: Getty Images)
via CAAI
By EDITH M LEDERER / AP WRITER
Tuesday, February 15, 2011
UNITED NATIONS — The UN Security Council expressed "grave concern" Monday at recent border clashes between Thailand and Cambodia and called on the two sides to establish a permanent cease-fire and settle the dispute peacefully.
The council gave strong backing to the efforts of the 10-member Association of Southeast Asian Nations — which includes both countries — to help resolve the conflict in the disputed border region surrounding Preah Vihear temple, a protected UN World Heritage site. Asean foreign ministers will discuss the clashes at Feb. 22 meeting.
Cambodia and Thailand have accused each other of starting the latest clashes which began on Feb. 4 and continued through Feb. 7. The battle over a hilly patch of land in the remote countryside is rooted in a decades-old border dispute that has fueled nationalist passions and has been driven by domestic politics and conspiracy theories on both sides.
Cambodia asked for the Security Council meeting, calling for UN peacekeepers or observers to prevent a renewed outbreak of violence, or at least a fact-finding mission. Thailand has repeatedly said it wants the dispute resolved bilaterally, without UN intervention.
After Monday's closed-door meeting, Indonesia's Foreign Minister Marty Natalegawa, who briefed the council as the current chair of Asean, said he was "far more optimistic than I was before about where we are." He said the Thai and Cambodian foreign ministers, who also briefed the council, both reiterated their country's desire for peace and underscored the need for a diplomatic solution.
At next week's meeting in Jakarta, Natalegawa said, Asean will "try to extract from the two countries concerned at the highest level possible a clear commitment that they wish to solve the problem peacefully through dialogue and negotiation."
He said Asean will also be seeking a more reliable mechanism or communication system on the ground to ensure that the cease-fire holds and a "road map" to a diplomatic solution. But he stressed that the ultimate solution must come from negotiations between Thailand and Cambodia.
The press statement by the Security Council "called on the two sides to display maximum restraint and avoid any action that may aggravate the situation." Members urged both countries to establish and fully implement a permanent cease-fire "and resolve the situation peacefully and through effective dialogue."
Brazil's UN Ambassador Maria Luiza Ribeiro Viotti, the current council president, said the UN stands ready to take further action if necessary but "right now regional efforts are in full force ... (and) of course, we hope it will be peacefully settled by the parties with Asean mediation."
Cambodian Foreign Minister Hor Namhong said in his address to the council, which was distributed to the media, that Thailand had carried out a "war of aggression" and while there were two cease-fire agreements, the current situation "remains extremely fragile."
"Fresh fighting may break out again at any time without forewarning, while heavily armed Thai soldiers, artillery and tanks have been positioned along the border, posing constant pressure on Cambodia," he said.
Hor accused Thailand of using "sophisticated weapons including cluster bombs" and artillery shells that reached as far as 20 kilometers (over 12 miles) into Cambodian territory. He said the Keo Sikha Kiri Svara pagoda and Preah Vihear temple suffered serious damage in the attacks which killed six people — two by cluster bombs — and injured 71 others.
The UN cultural agency, UNESCO, has said it plans to send a team to assess the temple's damage.
Despite Cambodia's push for UN peacekeepers, Hor said the country welcomed Asean’s help since the two countries have been unable to resolve the border dispute since 2008.
Thai Foreign Minister Kasit Piromya strongly denied that the Thai military used banned cluster bombs and blamed Cambodian troops for launching the first attack against the Thai military in Thai territory just a few hours after a "successful and cordial" meeting he had with his Cambodian counterpart in Siem Reap. He said two soldiers and two civilians were killed, many civilians and soldiers were injured, many civilian buildings were destroyed and some 20,000 Thai villagers had to be evacuated.
Piromya accused Cambodia of launching the attacks to bypass ongoing boundary negotiations between the two countries so it can push for approval of its proposed management plan for the Preah Vihear temple at a World Heritage Committee meeting in Bahrain in mid-2011.
He urged the committee and the UNESCO Secretariat to halt any further activities related to the temple until the boundary dispute is settled.
Piromya stressed in his speech to the council, which was also handed to reporters, that "Thailand has neither the intention nor the desire to seize territory of a neighboring country" and is "committed to peace." He said Thailand has proposed another meeting on the border issue in late February and still believes the dispute "should best be resolved between the two countries concerned."
Posted by CAAI News Media at 9:25 am