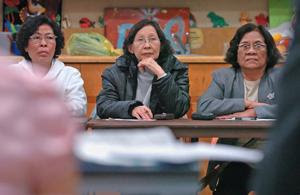 LONG BEACH - For decades, one of the debilitating fallouts for survivors of the Cambodian genocide has been their feelings of helplessness and powerlessness as victims.

A professor at Cal State Long Beach is trying to change that by giving Cambodians the opportunity to give testimony that could be used in the U.N.-backed Khmer Rouge tribunals being conducted in Cambodia.

Dr. Leakhena Nou, a medical sociologist at CSULB, is making it her mission to get the word out. And she's doing it one person and one community group at a time. One day it's at the United Cambodian Community. Another it's at McBride Park. A session in Orange County is planned. The more groups, the more testimonies, the better.

"It's a matter of human rights," Nou says of victims speaking out. "They have a right to be part of truth and reconciliation for their suffering and for their own healing."

And while justice may only seem symbolic and too-long delayed, Nou feels it is vital for healing and empowerment for the survivors and the generations that follow.

Nou typically starts by asking groups how many of them were victims of the Khmer Rouge, how many have bad dreams, how many would like justice.

The hands go up, the stories often gush forth.

An elderly Cambodian tells how she lost her entire family to atrocities. Another tells of her husband being pulled from a rice paddy and led to his execution. Another tells of losing 10 children. The stories emerge, each as heart-rending as the next.
For years these victims have mourned the dead but felt powerless to do anything about it. They still suffer from nightmares, depression and post-traumatic stress disorder.

Aaron Va works with the Asian and Pacific Islander Older Adults Task Force. Like Va, the people in his group are survivors. He says all have stories they want to tell but don't know where to go. And they still fear consequences of speaking out.

On Friday at 10 a.m. at McBride Park, genocide survivors will have a chance to fill out information forms and provide testimonials that will be forwarded to the victims' unit of the Extraordinary Chambers of the Courts of Cambodia, which is overseeing the trials.

If there is enough interest, more opportunities will be offered.

Last Wednesday, Nou and a pair of associates attended a Women's Health Forum at the UCC, and on Monday they met with the Asian and Pacific Islander group.

and-answer sessions about the roles of victims in the tribunals.

All victims and relatives of victims of acts of genocide during the Khmer Rouge reign between April 17, 1975, and Jan. 6, 1979, have the right to file complaints that will be brought to the ECCC.

However, time is short as the courts recently announced they will only take complaints for a limited time.

Sean Butler, an attorney helping Nou and her group, said a program has been set up to make it easier for victims to fill out the forms.

"This may be the only opportunity you have (to participate in the trial)," Butler told the crowd.

The first tribunal in Cambodia is currently under way against Kaing Geuk Eav, also known as Duch, who allegedly oversaw the mass torture and execution in prison camps, including Cambodia's notorious Tuol Sleng, or S-21, camp.

A second trial is slated for alleged Khmer Rouge leaders Noun Chea, Khieu Samphan, Ieng Sary and Ieng Thirith. The court will stop taking complaints 10 days before the second trial, which has not been scheduled.

Victims have two avenues to provide testimony. One is as a civil party, but that requires legal representation in Cambodia and could require travel to participate in the trials. The second avenue, which is free and the one Nou and Butler are assisting in, is for complainants who want to get their stories on the record without being required to testify.

Butler stressed that testimony is voluntary. However, he added that defense attorneys have the right to contact complainants.

And that's what worries some of the elders, who still fear retribution for having their names on the record.

One man worried he'd be targeted when he returned to Cambodia if he testified. Others were mistrustful of the proceedings.

Butler said the best defense for the victims was to testify in large numbers. Similar efforts are being organized in Lowell, Mass., Portland, Ore., Virginia, Chicago and elsewhere. However, Butler could not guarantee absolute safety from threats.

Joshua Bender, who is helping Nou, told the group that his family was victimized by the Nazi Holocaust.

"What helped me understand what happened to my family is the stories and the testimony of my grandparents," Bender said. "Because they had the courage to tell their stories, my community can keep its traditions. I hope through your courage your grandchildren can understand."

"We hope courage comes in large numbers and can help to heal the scars," Butler said.

People interested in testifying and groups with survivors who would like to become involved can contact ASRIC on-line at www.apa.nyu.edu under research and special projects or by calling Nou at 562-985-7439.
Posted by CAAI News Media at 11:26 pm