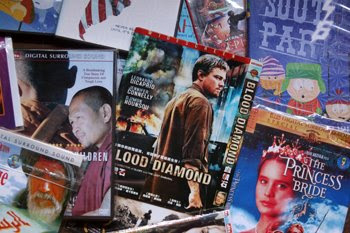 by: TRACEY SHELTON
A selection of the bootleg DVDs for sale in a Phnom Penh market on Monday.
The Phnom Penh Post

80,000 netted in citywide crackdown to be destroyed Friday.

ACITYWIDE crackdown on vendors selling pirated CDs and DVDs has netted over 80,000 illegal items in Phnom Penh as of Friday, according to officials, who warned that all stores that continue to sell the items will face hefty fines.

"According to Article 63 of the government directive banning the sale of pirate CDs and sex DVDs, most of the sellers are doing so illegally," he said, adding that 20,000 counterfeit CDs were confiscated in Toul Kork's Teuk Laak commune in 2008.

"We have announced that they must stop selling pirated CDs, but [vendors] did not listen."

Up in smoke
Mom Soth, director of the municipal Department of Culture and Fine Arts, said that 80,000 pirated CDs had been collected in the raids, and that the items would be burned at a government ceremony on March 26.

"We find it hard to control fake CDs because it is difficult to find who makes them and where they are produced," he said, adding that many vendors and producers of the goods were tipped off about raids and were able to close their stores in advance.

Kong Kanpara, chief of the Film Department in the Ministry of Culture and Fine Arts, said the government had made an inter-ministry effort to enforce copyright laws and stamp out counterfeit CDs, but that fighting against the flood of fakes sometimes proved fruitless.

"We take action against fake CDs every year in Phnom Penh and the provinces, but ... this business is bigger than ever," he said.

"We can't find who makes these things because the materials are kept at home."

However, Kong Kanpara said the fight was worthwhile, since the pirating of local films had all but paralysed the domestic film industry. He added that Cambodia used to produce around 50 films each year, but that the number had dropped to only seven or eight as the profit margins of production companies had been eroded by the sales of pirate DVDs.

As part of its latest crackdowns, he said vendors found selling pirated films and music would be fined 7,500 riels (US$1.82) per CD or DVD, and that any cafes or other venues screening illegal pornographic DVDs would be fined up to 20 million riels and sent to Phnom Penh Municipal Court.

Som Sokun, an undersecretary of state at the Ministry of Culture and Fine Arts, said bootleg CDs and DVDs were not only a violation of copyright, they also undermined legitimate products by price undercutting - but he said the way forward would be difficult.

"We are taking action against fake CDs, but we cannot do it all at once," he said. "We will try to reduce it step by step."
Posted by CAAI News Media at 10:43 pm