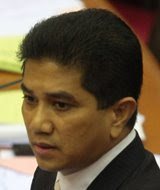 PNSB CEO Datin Khairiyah Abu Hassan said PNSB paid RM82,227 for that trip, including more than RM19,000 for library books, RM25,000 for accommodation and transportation for four people, inclusive of RM3,000 allowance for reporters and crew, and RM10,000 for the production of a video clip on Balkis.

Testifying before the Selcat on the second day of a public hearing probing into excesses of Balkis which obtained its funding from the state government and several state owned companies, she said the "repentance programme" involved the repair of a library, purchase of books and cash contributions to orphanages and families living in Muslim villages in Cambodia.

Khairiyah: "This was a programme designed to make people repent."

Khairiyah: Both sides repented. Because when those who visited the country saw how much of suffering there was, they repented.

Teng: So those who were suffering saw that we were rich, and so they too repented?

Khairiyah then said she reserved her comment on the terminology used as it was one that was coined by Balkis.

Azmin: So, did you notice a change or a tinge of repentance in those who went for the trip?

Haniza:"Why did the company agreed to sponsor a programme in Cambodia. Is there a lack of poor in this country that you have to go all the way to Cambodia to help?"

Khairiyah: There were 40 other people on the trip, including Balkis members, non-governmental organisation (NGO) representatives, corporate figures and the media.

Balkis president Datin Sri Zaharah Kechik headed the entourage, but PNSB only paid for four of them.

Khairiyah had earlier said that since 2002, PNSB had set aside RM1 million as annual allocation for Balkis every year.

Responding to a question on why PNSB had breached this allocation by giving Balkis RM1.6 million in 2003, she said: "We did not want to say no to a state programme. We have to support state programmes, as a state subsidiary, we are devoted to this."

She agreed that PNSB supported Balkis because it represented the wives of the elected representatives.
Posted by CAAI News Media at 11:20 pm