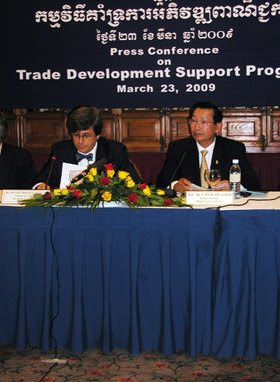 Written by May Kunmakara
Tuesday, 24 March 2009

The Trade Development Support Program (TDSP) focusses on streamlining cumbersome bureaucratic processes and promoting Cambodian products for export to foreign markets, according to the World Bank, which will provide oversight for the project.

The funding is to support training workshops and overseas trips to allow Cambodian representatives to network with foreign commerce officials.

"With global trade expected to shrink in 2009 for the first time in 27 years and Cambodia's economy under real pressure, we need to find wider export markets and bigger investors for Cambodia," said Qimiao Fan, World Bank country manager in Cambodia.

Commerce Minister Cham Prasidh said the government was intent on diversifying the range of Cambodian exports - a critical advance, he said, if Cambodia was to brave the global economic downturn.

The project is financed by the European Commission, The Danish International Aid Agency DANIDA and the United Nations Industrial Development Organisation.

"I believe that we can and should make some quick wins by building on progress that has been made in several areas," said Qimiao. "First, the government should further strengthen Cambodia's regional integration with its close neighbours and ASEAN partners, and second, it should promote higher productivity and greater diversification in agriculture."

He noted that Cambodia has not avoided falling victim to the global economic crisis, with downward trends in garments, tourism and construction.

Tom Barthel Hansen, of DANIDA, said that TDSP will support private sector development, with an emphasis on expanding employment opportunities in rural areas.
Posted by CAAI News Media at 9:48 pm