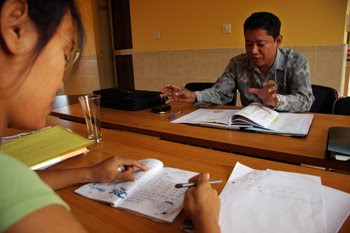 Despite the spread of English in the capital, Khmer language skills give foreigners a better understanding of citizens and their culture

While learning Khmer through chatting to your bartender may teach you the basics, established tutors are available to make you proficient for hourly rates that are little more than your average drink, some even giving you the first lesson for free.
The "Khmer Tutor" ads that seem omnipresent in Phnom Penh belong to Duong Soeurp.

A tutor since 2001, Duong Soeurp offers lessons in the student's home between 7am and midday, and 2pm and 8pm. While the first week is advertised as free, the catch is that if you continue learning you pay for the first classes, too.

"Following my method, it takes about 43 lessons to learn everyday Khmer. At a rate of five lessons per week, that's around 2 months," he said.

"I don't use a book when I teach. Instead, I have prepared my own material and during the lessons we focus on what the student wants or needs to learn," Duong Soeurp explained. "[My method] is fast and effective, as long as the students do their homework."

Rates start from US$5 per hour for five lessons per week, but the hourly rate goes up if one takes fewer classes, and there are also different prices based on class length and number of students.

For slightly more structured learning, try centrally located HPN School on Street 282. Here, five tutors with qualifications from English language schools teach Khmer in private classes starting from $5 per hour for one person. Lessons are also offered at the student's home, albeit with a $1-$2 motorbike surcharge.

The learning process
"We start with speaking and afterwards introduce reading and writing," said tutor Heng Kim Srong, while showing the school's self-made textbook, which can be purchased for $1. "Most students have difficulties in pronunciation and listening, as several of the sounds we have [in Khmer] do not exist in English. The structure of the language is generally the easiest part."
HPN's classes are offered weekdays between 7am and 8pm, though the office is only open from 8am to 5pm.

Heng Kim Srong recommends that students take at least three classes per week.
Tutor Than Dara is an old-timer when it comes to teaching Khmer.

"I started teaching at the refugee camp on the Thai border in 1989, and in 1991 I taught the very first group of VSO volunteers in Phnom Penh," Than Dara said, referring to the British organisation Voluntary Service Overseas, where he continues to teach to this day.

"I have taught Khmer to hundreds, maybe over a thousand students - some of them very high-ranking people, too," he continued, adding that he has also published his own textbook on the subject.

Than Dara encourages foreigners to learn the local language, as it allows for communication without a translator, and Cambodians are likely to be much friendlier, too.

"You need self-motivation to learn a language, but regardless of which language you learn it is a beneficial process. Once you start understanding people, you get a sense of pride in your achievement."

According to Than Dara, foreigners are more and more keen to learn Khmer. However, he also notes how the spread of English has reduced the need for his translation services.

"Before, when not so many people spoke English, they would constantly call me for help, but today other people can translate too, or everyone speaks English," he said.

Than Dara's classes start at $10 per hour for one person or $5 each for two. Private lessons are generally held at the student's home.

Following five years in Cambodia, Elijah Penner speaks fluent Khmer and is happy to have learned the language.
"It was thorough. I had the good fortune and unique experience of getting to live with a Cambodian family for four years, as well as my own determination," he said.

Similarly, Conor Wall, who has been in Cambodia for around three-and-a-half years and speaks vernacular Khmer, has always lived with a local family.

"I taught myself. When I first came here, I wasn't working so I spent three to four hours every day learning," he said.
Both Wall and Penner see real benefits in being able to communicate with the locals.

"Knowing the language has most importantly provided each and every Cambodian I come across with an immediate sense of value of themselves, their culture and their language. It also opens the door for relationships to be built with locals," Penner said.

"You can make friends. And you can talk to people - especially older Cambodians who don't speak English. They are very genuine. Also, it's cheaper when you go to the market," Conor Wall said.

The British learn French, the Australians study Japanese and the Americans prefer Spanish. Yet this leaves Mandarin Chinese and Arabic out of the equation
.
Why not teach a common neutral non-national language, in all countries, in all schools, worldwide?

I am sure this paragraph has touched all the
internet viewers, its really really good piece of writing on building up new
web site.
Also visit my homepage - transfer news at arsenal football club

I've been browsing on-line greater than 3 hours nowadays, but I by no means found any attention-grabbing article like yours. It's beautiful value sufficient for me.
In my view, if all site owners and bloggers made just right content material as you did, the web will likely be much more useful than ever before.
Also visit my homepage - football transfer news january 2013

Hi to all, how is all, I think every one is getting more
from this website, and your views are good designed for
new viewers.
Feel free to visit my web blog transfer rumours premier league 2013

Hi, I do think this is a great website. I stumbledupon it ;) I'm going to revisit once again since i have bookmarked it. Money and freedom is the greatest way to change, may you be rich and continue to help other people.
Have a look at my weblog man utd transfer rumours december 2012

I simρly couldn't go away your web site prior to suggesting that I extremely loved the usual info an individual supply for your guests? Is gonna be again steadily in order to check out new posts

Have a look at my web site :: apartmentsinmesaaz.net/

Amazing! This blog looks just like my old one! It's on a entirely different subject but it has pretty much the same page layout and design. Great choice of colors!