Human Trafficking on the Rise in Cambodia

Every year in Cambodia, hundreds of girls are trafficked and sold into brothels where they are forced to work as sex slaves. Although precise figures are unavailable, analysts say that the rate of trafficking is soaring. Many of the victims endure years of torture and abuse in brothels, resulting in lasting physical and psychological damage.

Despite recent efforts by the Cambodian authorities to curb the country's huge illicit sex industry, analysts say it is continuing to thrive. Although many brothels have closed their front doors, their back doors remains wide open. Other brothels are using hairdressers or beauty shops to front their illicit trade.

Although some sex workers do the job to escape poverty, many of those working in brothels are victims of human trafficking who are held against their will and forced to work as sex slaves. 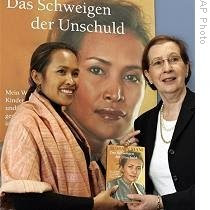 German UNICEF Chairwoman Heide Simonis, right, poses with Somaly Mam from Cambodia, following a news conference on child prostituion in Berlin (File)
Founded by a former sex slave, The Somaly Mam Foundation was set up in 1996 to rescue and rehabilitate victims of human trafficking.

Since then, the group has rescued more than 5,000 girls from brothels throughout Cambodia and is now caring for more than 250 former sex workers, more than half of whom were under 18 years of age.

Somaly Mam says that the trafficking problem is getting worse every year. She blames organized crime and corrupt officials for running the industry.

She says that criminal networks have set up a structured people-trafficking system. She says agents go from village to village, looking for girls whom they lure away with promises of marriage or a good job. She says that, because many of the victims are poorly educated, they fall for the trick and when they come to the city they get locked in a brothel.

Vann Sina was lured from her village with an invitation to a Christmas party when she was just 13 years old. When she arrived in Phnom Penh she was locked in an underground cellar.

Life in a brothel is a living hell, says Somaly Mam, as she recalls her years of abuse:

She says that, if you have never lived in a brothel, you cannot understand how bad it is. She says she had to receive more than ten clients a day and that most of them were drunk, smelled bad and were very violent. She says that the terror she endured was so bad it is indescribable.

Years spent locked in a brothel takes a huge mental and physical toll on the victims. 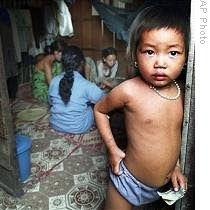 As well as the scourge of AIDS and other sexually transmitted diseases, many are psychologically damaged by their experiences

Most of the girls who arrive at the Somaly Mam Foundation require years of therapy, says chief doctor Ma Ly.

She says that most of the girls who come to the center have severe mental problems. She says they get angry easily, they shout a lot and many of them just want to die. She says she tries to encourage them to love themselves again, but that can take years of therapy.

The Somaly Mam Center creates a loving environment where former victims can make new friends and attempt to recapture their lost childhoods.

Somaly Mam says the center tries to teach them to love themselves again, but that they must never forget what happened to them.

She says, just because you have lived in a terrible situation, it does not mean that you are a bad person. She says that she has survived by reshaping her past and turning it into something positive.

As well as treating victim's mental and physical injuries, the Somaly Mam Foundation provides further education and job training to help the girls find employment after they leave the center.

But the main aim is to teach the girls that their lives have meaning and that they can have a bright future.

A woman says that, when she was in the brothel, she never thought she could escape from that hell. She says she thought her pain was for a lifetime but that today she feels much better.

Analysts say there are more victims of human trafficking today than at the height of the trans-Atlantic slave trade.

Without a greater effort to stamp it out, thousands other girls in Cambodia and around the world will fall victim to this modern-yet-ancient form of slavery.
Posted by CAAI News Media at 7:35 am