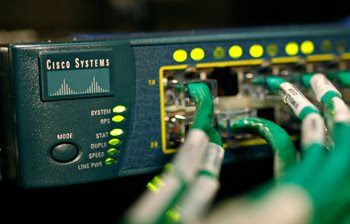 SINCE 2002, Cisco, the largest maker of networking equipment in the world, has run computer network training courses for Cambodians.

Based on the program's success in its early years at the government's National ICT Development Authority facility in Phnom Penh, the training program has expanded to high schools and universities in the capital, said Hong Sophany, a marketing representative of Cisco Networking Academy Program at Yejj Institute.

For Leng Bunny, an instructor with Cisco, the motivation for the training is simple: "People enroll because it gets them jobs."

A Cisco-approved tag, he said, does not come easily. Students must undergo four course levels, each three months long, and pass a final test to earn the title Cisco Certified Networking Associate.

"The popularity of the training class is growing fast along with the development of the telecoms sector in Cambodia," Leng Bunny said.

Around 2,250 people have enrolled in the Cisco Networking Academy Program since its inception, with 164 earning a Cisco Certified Networking Associate degree and just six earning Cisco's Professional degree.

Lorn Pisal, an employee at Campura Systems Corporation, attended the program from 2005 to 2007. He said that before carrying the training on his resume, it was exceedingly difficult to get a job. Since graduating, he is automatically shortlisted, he said.

"The people who take this course are the first people to be selected for jobs," he said. "And the information and technology sector is the most promising in Cambodia for long-term careers."

Cisco stipulates people must have at least two years of university experience to enroll. Fees are US$100 per course. In an effort to promote the employment of women in the information and technology sector, women are given a 60 percent discount on tuition fees, while public servants receive a 50 percent discount.

Thanks for sharing such a great blog Keep posting..
CCNA institute in Delhi

It’s really nice and meaningful. It’s really cool blog. You have really helped lots of people who visit Blog and provide them useful information. Thanks for sharing.

Well this is awesome and well shared by you. I really like your posts here. Thank you and keep sharing.