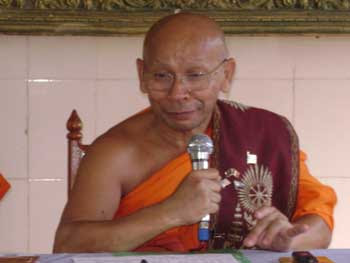 IN his first interview with the media since being accused of attacking and biting his fellow monks and nuns, the chief monk of Preah Sihanouk province’s Wat Leu and adviser to Supreme Patriarch Tep Vong told the Post on Tuesday that the allegations against him were totally baseless.

“I am a monk. I have been ordained for 20 years already. How could I drink wine? If I drank wine, I would have defrocked myself, but I haven’t done this,” Kiet Chan Thouch said, accusing his colleagues of acting on personal agendas. “There are some monks and nuns who are accusing me of things for their own profit, getting local newspapers to write bad things about me. All I asked them to do was to clean the pagoda on Phchum Ben day. I’m the leader. It’s up to me to order them to work, but they said I mistreated them. I am a monk, so how can I have a gun?

“If I was supposedly fighting with them, why didn’t they stay at the pagoda and talk with me instead of running to talk with the newspapers? This is a part of Buddhist Lenten practice, that a monk cannot stay away from the pagoda. I’m a monk, but I still know about penal law. If I fight with people, the police will come to arrest me. They wouldn’t allow me to stay in the pagoda, as they are today.”

Despite his protestations of innocence, one of the monk’s colleagues insisted the original claims were true. The Venerable Koa Suon told reporters Kiet Chan Thouch bit him in the incident, which took place earlier this month. “This wasn’t the first time he’d drunk wine or threatened to fight other monks,” the 76-year-old said. “He would always threaten violence against all the monks and nuns in the pagoda, but nobody dared to say anything because they were scared of his power.”

A resolution seems unlikely, with various authorities reluctant to intervene. Kang Dinath, Preah Sihanouk province chief for the Department of Cults and Religions, said: “This case lies outside of my jurisdiction because it’s a matter among the monks,” he said. “I’ve reported my findings to the provincial chief monk already, so what happens now is up to them.”

Provincial chief monk Muo Rorn, however, also denied responsibility. “This case is outside of my duties,” he said. “I have no right to make a decision on this case, so I have reported it to the provincial governor, and now I have sent it to Phnom Penh. I dare not say what will happen. It’s up to the chief monk in Phnom Penh.” Non Nget, chief monk of Cambodia, could not be reached for comment.