Food prices hold steady in Q3 with inflation at 1.1pc 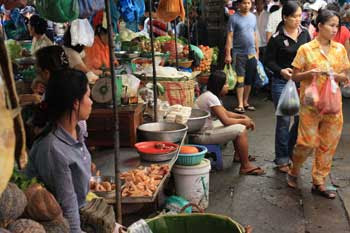 Shoppers buy food at Central Market in this file photo. Inflation on food prices remained low in the third quarter in sharp contrast to the large increases in July and August 2008.

Ministry of Commerce figures show inflation is under control, but analysts say rising prices will speed up through year-end.

Following quarter-on-quarter deflation of close to 5 percent in the first three months of the year on a basket of 36 common household foodstuffs, and 1.7 percent inflation in the second quarter, the period from the end of June to the end of September saw a stabilisation in prices on items from maize to MSG.

The trend mirrors that shown by recent government consumer price index (CPI) data that suggest inflationary pressure has eased over the past three months: CPI rose 1.8 percent in June, slowing to 1.5 percent in July and 0.7 percent in August.

“With lower domestic demand and commodity prices, inflation pressures have eased in 2009,” the International Monetary Fund (IMF) said last week after concluding a mission to Cambodia.

Rice, the staple for many Cambodians, saw a 4.7 percent rise for the milled variety, while paddy fell in price compared with the end of the last quarter, down 1.9 percent.

“The increase is very small compared to previous years [during the third quarter],” said Yang Saing Koma, president of the Cambodian Centre for Study and Development in Agriculture.

Usually rice prices climb in the third quarter, he said, as supplies become scarcer ahead of the harvest season at the end of the year.

A good harvest is expected this year, the IMF said last week, meaning supply is unlikely to place too much inflationary pressure on food prices.

The Economist Intelligence Unit (EIU) forecast in its October outlook for Cambodia a 20.3 percent decline in food prices this year compared with 2008.

“In line with global trends, food and fuel prices have fallen from their highs of mid-2008,” it said.

Over the same period, crude prices have fallen slightly on the international market – the source of all Cambodia’s oil products – from about $70 a barrel to just over $67 a barrel Wednesday in Singapore.

Cambodia’s inflation has cooled since the third quarter of last year, when it was running at a peak of more than 20 percent year on year following huge increases in food prices that led the government to express concern over food security in the Kingdom.

Following the onset of the economic crisis in Cambodia in the last quarter, prices then began to fall.

San Sy Than, director of the National Institute of Statistics, the organisation that compiles CPI data, told the Post Wednesday that inflation is likely to return in the coming months.