Photos expose capital from the inside out 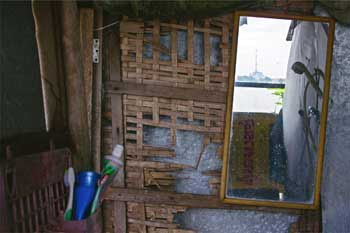 In an upcoming photo exhibition called “Inside”, running throughout October at Sa Sa Gallery, five Cambodian photographers celebrate the quiet details of their lives in the homes and buildings where they live.

As a continuation of the “Outside” photo exhibition that was shown at Java Cafe, “Inside” features 28 40cm-x-60cm photographs, each focusing on the details of life within a home’s walls.

There are no people in the images, partly due to the extended exposure of the camera, but also as a commentary on the destructive impact of people on the classic buildings, he said.

Kong Vollak, the 26-year-old founder of Sa Sa Gallery who is also among the five photographers, spotlights the Cambodian kitchen, bedroom and living room in her photographs.

The exhibit, which opened Tuesday, can be seen at Sa Sa Gallery on Street 360 through October 29.