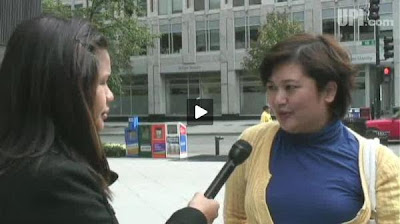 A Red Cross official in the province, about 80 miles from the capital, Phnom Penh, said the nine died in the collapse of their home. He said several homes in the province were destroyed as heavy rain worsened the flooding problem.

Southern Laos appeared to be the next target of the storm.

Ketsana hit Vietnam and Cambodia Tuesday with typhoon strength winds, while in the Philippines it came ashore near the capital Manila as a tropical storm accompanied by torrential rains.

Flooding from the rains killed more that 240 people in Manila and neighboring suburbs and dumped mud and filth into the homes of tens of thousands of people. More than 300,000 people took refuge in temporary shelters.

In Vietnam, the typhoon killed more than 30 people and forced about 200,000 people out of their homes mostly in the central provinces, the BBC report said, adding severe flooding continued Wednesday in some of those regions.

Even as relief officials in the Philippines coped with dwindling food and other supplies to help the thousands of victims, weather officials warned of new storms approaching.

In Cambodia, international organizations pitched in to help government agencies distribute tents and food to affected people in five provinces, the BBC said.

CNN quoted aid agencies in Vietnam as saying about 200,000 had been evacuated from flooded areas. An estimated 13 inches of rain fell on the city of Hue, the report said.