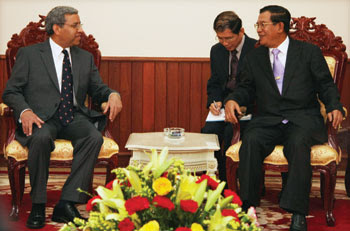 THE UN’s human rights envoy to Cambodia said progress had been made on human rights issues in the Kingdom, following talks with Prime Minister Hun Sen at the National Assembly on Tuesday.

“We discussed a wide range of human rights issues. We have been making progress on freedom of expression and the NGO law, land evictions and the cooperation between civil society and the government,” Surya Subedi, the UN’s special rapporteur for human rights in Cambodia, told reporters after the meeting.

“I will not go into individual specific allegations of human rights violations. We are looking at the total picture of the human rights situation in Cambodia.”

Subedi arrived in Cambodia on Monday for a 12-day visit to examine the functioning of the National Assembly and judiciary, and probe the current human rights situation in the Kingdom, according to a statement released by the UN on Friday. The visit, Subedi’s second, comes following a similar mission in June.

Subedi said that though there are a number of human rights issues that remain a concern in Cambodia, his discussion with the prime minister was cordial.

He described as positive the government’s stated goal of strengthening the country’s human rights mechanisms, ultimately leading to the establishment of an independent Human Rights Commission to monitor human rights issues throughout the country.

Subedi and Hun Sen also both approved of the idea of an election to select a civil society representative who could liaise directly with the government over issues of concern, said Om Yentieng, head of the government’s Human Rights Committee.

“The two sides have opened their hearts in a dialogue about the development of the human rights situation, and Prime Minister Hun Sen agreed with Subedi’s idea of calling on the NGOs in Cambodia to elect their representative in order to facilitate dialogue with the government,” he said.

He added: “I think that Subedi is in a transitional period and wants to get some ideas from Hun Sen in order for the UN to help support Cambodia on human rights issues.”