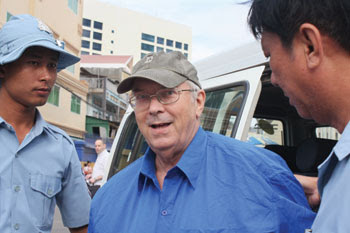 A hearing in the case of accused American paedophile Harvey Alexander Johnson, 57, (centre) was delayed Tuesday for lack of an interpreter.

PHNOM Penh Municipal Court on Tuesday found a 62-year-old Swedish man guilty of two counts of committing indecent acts and having sex with children, and sentenced him to six-and-a-half years in prison.

Johan Brahim Escori was also ordered to pay a fine of 4 million riels (US$963).

Police arrested Escori last May at a hotel in Phnom Penh’s Daun Penh district, where he was sharing a room with a 9-year-old boy who he claimed was his adopted son.

“This man was convicted of regularly abusing underage boys beginning in 2007, both in Phnom Penh and Preah Sihanouk province,” he said, adding that Escori would be permanently expelled from Cambodia after serving out his prison term. Escori will be credited for the seven months he has already served.

Samleang Seila, APLE’s country director, said he welcomed the court’s decision, which he said “sends a clear, serious message: ‘Do not commit sex crimes in Cambodia’”.

“For this conviction, we must thank the Swedish authorities for sending over documents showing that as early as 1981, this man had already been accused of sexually abusing boys whom he misrepresented as adopted sons,” Samleang Seila said. “This evidence helped ensure that justice was delivered here in Cambodia.”

Also Tuesday, the first hearing in the case of a 57-year-old American charged with committing indecent acts against a 12-year-old girl was postponed until February 2 because the court could not find an interpreter.

Harvey Alexander Johnson was arrested on August 9 at his rented home in Phnom Penh’s Boeung Kak commune after APLE caseworkers presented authorities with statements by 10 underage girls accusing him of sexual abuse.

“Johnson built up his victims’ trust by giving free English lessons in his home and acting like a kind person,” said Keo Thea, chief of the municipal police’s Anti-Human Trafficking Bureau.

“The failure to find an interpreter for my client was the fault of court officials, who knew that my client was unable to afford one on his own,” he said. “It was also a waste of my time, as I am already well-prepared to seek justice on behalf of my client, who is innocent.”