Women see Facebook as a recipe for business success 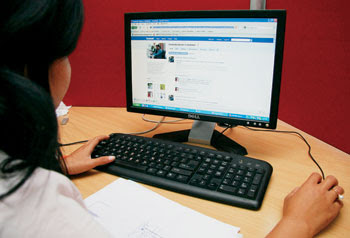 A female worker takes a look at the Cambodia Women in Business page on Facebook Tuesday. The group reached 100 members Monday, a figure that is still rising.

UNDERREPRESENTED female entrepreneurs in the Kingdom are utilising the Internet in a bid to discuss their problems and encourage business growth.

A group called Cambodia Women in Business has set up on social-networking site Facebook to act as a forum for businesswomen.

It was started by female participants in the Government-Private Sector Forum (G-PSF), a group that facilitates business discussions between the public and private sectors. They found that only 10 percent of participants were women, despite a 2009 study by the International Finance Corporation (IFC) and Asia Foundation which found that 55 percent of private businesses in Cambodia were owned by females.

A spokeswoman for the IFC Coordination Bureau, which organises the forum, explained that participation by women in formal associations and forums may be lower, as many operate small and informal enterprises.

The IFC hopes that for some, the forum will provide an accessible place where gender-related issues can be discussed.

“Since these women were all using the Internet, they thought setting up a Facebook page would be a good means of facilitating dialogue on this topic.”

Since its launch in November, over 100 women and men have become members of the site. They post links to academic studies, newspaper articles and discussions on gender equality in Cambodia.

The IFC reports the reaction has “been very enthusiastic” so far. It hopes that by promoting women’s empowerment, they can fuel economic growth within the business community and so reduce poverty.

Former women’s minister Mu Sochua of the Sam Rainsy Party welcomed the move, but said she believes that underlying issues causing gender inequality need to be addressed in Cambodia, and that the Internet is an inaccessible resource in much of the country.

She pointed to a lack of education, the pressures for women as carers, societal values and poverty – as well as considerations such as micro-finance interest rates – as factors holding women back in developing small businesses such as tailors, grocery stores and wedding outfitters.

Scholars from the Shinawatra International University in Thailand and Preston University in Cambodia interviewed 61 female entrepreneurs in Phnom Penh in 2009 and reported that 47.5 percent of respondents had a problem balancing work with being a housewife, 14.8 percent reported resistance from their husband’s family and 9.8 percent spoke of the indifferent or hostile attitude of society towards female entrepreneurs.

“Anything that is helping women in business have access to information is a good thing. If women were more educated, they’d be able to use computers and the Internet. In turn, that would help advance their businesses,” said Mu Sochua.

However, she said, gender relations in the Kingdom are changing as female role models – such as radio presenters – reach the public eye.

“But women themselves have to be more confident. Women’s empowerment in all sectors is so important.”