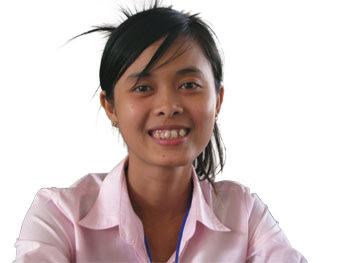 Virak Bonnarath studies tourism purely for the love of it. She said she became interested in tourism when she realised the significance of the sector in Cambodia.

“Tourism is one of the sectors that has the potential to improve Cambodia’s economy. Working in tourism does not mean you’ll work just as a tour guide or in hotels, but you can also work on the development of tourism, such as how to establish tourism plans and policy,” Virak Bonnarath said.

As a student of tourism, Virak Bonnarath thinks that a lack of study materials, English language skills, and computer and Internet competency are holding students back from getting jobs in the tourism industry. At first, she said, she was challenged by courses in which all materials were written in English, and it also took her more time to adopt computer and Internet skills. She explained that Cambodia is filled with tourism resources, but still lacks in human resources.

“In order to succeed in studying tourism, we have to stand on three main points, the major of tourism, the English ability and the volunteer work,” she said, adding that some students give effort in their class, but disregard the importance of English and volunteer work. Virak Bonnarath is involved with volunteer work now at Citizen Action Net for Social Development.

She always tries to join social activities because they make her feel confident and they will help towards receiving scholarships, she said.

After she finishes her undergraduate degree in tourism, she wants to pursue a masters degree in the same subject, with the ultimate aim of working at the Tourism Ministry, focusing on tourism development in Cambodia.

She says the Kingdom’s tourism continues to grow “step-by-step”, despite the crippling effects of the global economic crisis, which saw tourist numbers in Cambodia plunge over the last year.

“I think even now, while facing this crisis, tourism can work. Cambodia is famous as a tourist destination and has many resources for visitors, so it is not a problem,” Virak Bonnarath said.