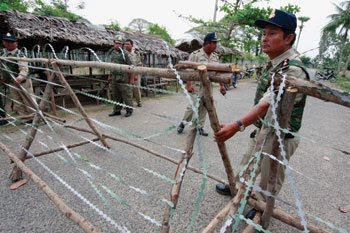 Police in Svay Rieng province set up a barricade to prevent some Sam Rainsy Party lawmakers from visiting villagers awaiting trial in connection with an October border protest.

LAWMAKERS from the opposition Sam Rainsy Party (SRP)on Tuesday were allowed to visit imprisoned Svay Rieng province villagers accused of helping to tear out border posts along the Cambodia-Vietnam frontier – in what they called a last-ditch effort to draw publicity to the issue ahead of a trial scheduled for next week.

While police had originally pledged to block Tuesday’s visit, three SRP lawmakers and two family members were allowed into the provincial prison.

“They have done nothing wrong at all,” Yim Sovann told reporters waiting outside.

“When they lost their land, it meant that they lost their rice fields. I think today the world and Cambodia will be aware of the suffering of the two victims in prison.”

Council of Ministers Spokesman Phay Siphan suggested that Tuesday’s visit was purely a publicity stunt. “It’s so strange to attract the media to talk about these people,” he said.

“Visiting [your supporters] in jail may be the right thing to do. But keeping them from jail in the first place is better. They should not be inciting people to do things that are against the law.”

Prom Chea and Meas Srey are awaiting trial in connection with an October incident in which they allegedly assisted opposition leader Sam Rainsy in uprooting border markers. Sam Rainsy has claimed that the markers were evidence that Vietnamese authorities were encroaching on Cambodian soil.

Svay Rieng provincial court has charged the opposition leader with racial incitement and destroying public property. A total of five villagers were also charged in the case, though three are on the run. Sam Rainsy remains out of the country.

After the visit to the prison, SRP lawmakers brought reporters to a nearby border area where Yim Sovann said Vietnamese officials had removed border markers.

“They’re aware that if they do not remove the markers, maybe more and more Cambodian people will ask the government to investigate,” Yim Sovann said.

“They removed them to eliminate evidence.”