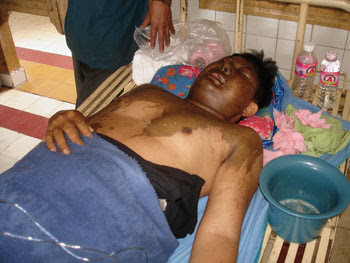 Acid attack victim Yun Sarun, who police say was doused with acid on Monday by his wife, receives treatment for serious injuries he sustained to his face and upper body.

LOCAL rights groups are renewing calls for authorities to regulate the sale of acid in the Kingdom, in the wake of another violent attack that has left a man with serious injuries to his face.

Police have identified the most recent victim as Yun Sarun, 33, who was doused with acid on Monday as he was sleeping. Investigators have accused the victim’s wife of pouring the corrosive liquid over her husband’s face in a fit of jealous rage.

“His wife was very angry with her husband because he loved another woman,” said Khat Khuntith, an officer with the Boeung Kak II commune police.

Yun Sarun was being treated for serious injuries to his face and upper body at Preah Kossamak hospital Tuesday.

“The acid was poured onto his face, and it flowed until it reached his waist. It looks like a burn from a fire,” Khat Khuntith said. “Both his eyes and his mouth are swollen … but he can open his eyes and see everyone around him.”

The policeman questioned how the victim’s attacker was able to buy so much acid, which, in concentrated form, can eat through human skin, muscle and bones.

“I wonder why the acid-seller sold acid to the buyer without asking what she planned to use that acid for,” Khat Khuntith said. “I have often seen people buying acid, but not for their motors or machinery.”

This week’s attack prompted further outcry from rights groups that have long decried the ease with which people are able to purchase acid in the Kingdom.

“Cambodia has to create a law to control the use of acid,” said Am Sam Ath, senior monitor with the rights group Licadho, who warned that incidences of acid attacks will only increase in the absence of policy changes.

But Khieu Sopheak, spokesman for the Ministry of Interior, said the importance of acid in people’s daily lives – for use in car or motorcycle batteries, for example – makes it difficult to manage.

“It is difficult to create a law to control the use of acid,” he said. “We cannot ask buyers what they are buying the acid for.”

The attack on Yun Sarun added to the recent spate of reported acid attacks, which appear to have increased dramatically in recent months.

The Cambodian Acid Survivor’s Charity counted at least five such attacks nationwide in December alone – a figure that represents roughly half of the attacks the group had tallied for the entire year up until that point.