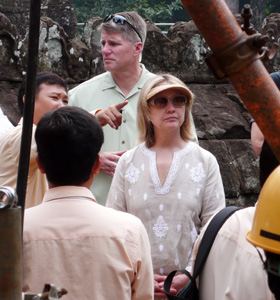 Photo by: Khem Sovannara
Hillary Clinton visits the Bayon temple, part of the Angkor Wat temple complex in Siem Reap, on Sunday.
via CAAI
Sunday, 31 October 2010 14:09 Thomas Miller
United States Secretary of State Hillary Clinton arrived in Siem Reap Sunday for a scheduled two-day visit to Cambodia, amid a flurry of rights concerns on display during last week’s visit by United Nations Secretary General Ban Ki-moon.
In a statement on Saturday, the US state department said the visit, the first by an American secretary of state since Colin Powell’s trip to the Kingdom in 2003, highlighted Washington’s commitment to “enhanced, sustained, and comprehensive engagement in Southeast Asia”.
Foreign Minister Hor Namhong hailed Clinton’s arrival as a reflection that “the relationship between the government of Cambodia and the US has grown closer” in recent years.
But Hor Namhong said that Cambodian officials would again request the cancellation of the debt that was incurred under the Lon Nol regime in the early 1970s.
“I think the US does not know exactly the stance of Cambodia on this matter, and I will raise it with [Clinton],” he said.
The issue has become a thorn in the side of US-Cambodian relations, with Prime Minister Hun Sen denouncing the debt as “dirty” money that fuelled Cambodia’s civil war.
The US argues that cancelling the debt would set a “poor precedent”, and that Cambodia is capable of paying it back.
In Siem Reap, Clinton toured Angkor Wat and met Somaly Mam, the head of the anti-human trafficking organisation AFESIP.
Today, she is set to meet King Norodom Sihamoni and senior government officials – as well as opposition leaders – in order to “highlight the importance of a vibrant political arena where all voices are heard”, according to the US state department.
Clinton is also scheduled to visit the Tuol Sleng Genocide Museum and hold a “town hall” forum with students at Chaktomuk Conference Hall.
But Clinton’s visit may be overshadowed by rights concerns that arose during Ban’s visit to the Kingdom.
During a meeting with the UN head, Hun Sen said the government would prevent the Khmer Rouge tribunal from prosecuting any additional cases beyond its second, and reportedly ordered the UN to close its human rights office in Phnom Penh.
Both incidents prompted outrage from local and international rights groups. In a joint statement last week, Human Rights Watch and Amnesty International called on Clinton to “publicly express support” for the UN rights office.
Phil Robertson, HRW’s deputy Asia director, said the events “raise the bar” for Clinton’s visit, and urged her to indicate Washington “is not willing to countenance this kind of blustering intimidation of UN personnel”.
On the final day of Ban’s visit, police beat local activist Suong Sophorn unconscious as he attempted to deliver a petition protesting against land evictions to the secretary general.
Local organisations, including rights groups, unions and the opposition Sam Rainsy Party, have called attention to the human rights situation in Cambodia and urged the US to take a firm stand on the issue.
Embassy officials were unable to provide specifics on whether Clinton would raise these issues in talks with government officials.
Clinton is taking her sixth trip to Asia as secretary of state, illustrating a wider US strategy of increased engagement with the region.
She started the tour in Hawaii with a major address on US-Asian relations, attended the ASEAN Summit in Hanoi and later held a brief meeting with China’s state councilor for foreign policy, Dai Bingguo. After Cambodia, she will visit Malaysia, Papua New Guinea, New Zealand and Australia.
Posted by CAAI News Media at 12:06 am