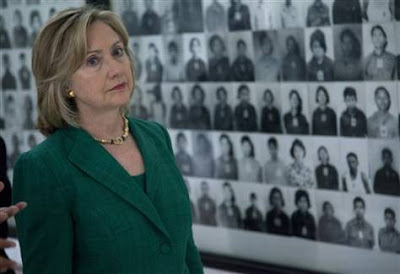 Evan Vucci / AP
U.S. Secretary of State Hillary Rodham Clinton looks at a wall of faces of those killed by the Khmer Rouge regime, during a tour of the Tuol Sleng Genocide Museum, formerly the regime's notorious S-21 prison, on Monday, Nov. 1, 2010, in Phnom Penh, Cambodia. Clinton urged Cambodia to improve its human rights record and ensure the Khmer Rouge are brought to justice for crimes against humanity in the 1970s. (AP Photo/Evan Vucci, Pool)

via CAAI
By MATTHEW LEE
PHNOM PENH, Cambodia — U.S. Secretary of State Hillary Rodham Clinton on Monday urged Cambodia to confront its troubled past by ensuring Khmer Rouge leaders are brought to justice for crimes against humanity in the 1970s and improve its current human rights record.
She also said the U.S. will reopen talks with Cambodia on another historical hangover: about $445 million in Vietnam War-era debt that it owes to the United States but maintains it cannot afford to repay. And, as Cambodia develops, she cautioned against overreliance on any one country, notably China, for investment.
In the capital, Clinton visited a former school that served as the main Khmer Rouge prison and torture center and appealed for the Cambodian people and government to overcome a legacy of impunity for abuses. The government has refused to allow a U.N.-backed court trying top Khmer Rouge leaders to prosecute lower-ranking members.
Clinton toured the infamous S-21 prison where as many as 16,000 people were tortured by the Khmer Rouge before being executed for alleged counterrevolutionary behavior. The ultra-leftist regime is blamed for the deaths of some 1.7 million people from starvation, disease, overwork and execution during its 1975-79 reign.
"It's a very disturbing experience and the pictures — both the pictures of the young Cambodians who were killed and the young Cambodians who were doing the killing — were so painful," she told students after the tour. "But I also came away very impressed because a country that is able to confront its past is a country that can overcome it."
"Countries that are held prisoner to their past can never break those chains and build the kind of future that their children deserve," Clinton said. "Although I am well aware the work of the tribunal is painful, it is necessary to ensure a lasting peace."
The Khmer Rouge tribunal closed its first case in July when it convicted the regime's chief jailer and head of S-21, Kaing Guek Eav, also known as Duch. He was sentenced to 19 years in prison on charges of war crimes and crimes against humanity. A second trial is expected to start next year for the four top surviving Khmer Rouge leaders.
But Cambodian Prime Minister Hun Sen has said the trials will stop there, despite U.N. wishes to bring lower-ranking officers to justice for murder, torture and other crimes. The U.N. says progress has been blocked by political interference from Cambodian officials who oppose more prosecutions.
Critics accuse the Cambodian leader of trying to limit the tribunal's scope to prevent his political allies from being indicted. Hun Sen once served as a Khmer Rouge officer and many of his main allies are also former members of the group.
Cambodian Foreign Minister Hor Namhong said after meeting Clinton that expanding the scope of the tribunal would "jeopardize peace and stability in Cambodia."
Clinton called for full support the tribunal, which needs $40 to $60 million to hold the second trial, and said that an expansion of its mandate needed to be discussed. But, she said "my highest priority right now is to make sure that we have that money in place so that trial can begin. The sooner, the better."
Clinton also said the government, which has been criticized for cracking down on opposition groups, must do more to protect human rights. She met privately with opposition leaders before departing for Malaysia on the next leg of a two-week, seven-nation tour of the Asia-Pacific.
Last week, Hun Sen told visiting U.N. chief Ban Ki-moon that he must close down the U.N. human rights office in Cambodia, which he accuses of interfering in the country's internal affairs. Hor Namhong noted that there were already more than 100 human righst groups in Cambodia but said no decision had yet been made on the U.N. office.
Clinton said keeping the U.N. office open is critical to Cambodia's development.
"We think the work is important and we would like to see it continue," she said.
On repaying the outstanding loans, Clinton said she was ready to explore creative ways the country could make good on the arrears, possibly by agreeing to preserve key environmental areas or investing in education. A team of U.S. experts will travel to Cambodia soon to resume negotiations on the matter that were last held in 2006, she said.
"There are things that the Cambodian government can do to demonstrate some level of accountability," she said, adding the debt issue "is hanging out there and it needs to be addressed."
As Cambodia develops, she told a student who asked about massive inflows of cash from China that Cambodia should broaden its relations to the fullest extent possible.
"You don't want to get too dependent on any one country," she said. "China is a great country and China has a very exciting future." But, she said, "as a historical observation, having good relations with as many countries as you can ... is the best way to go and I would hope that that's what Cambodia chooses to do in the future."
Posted by CAAI News Media at 1:02 am