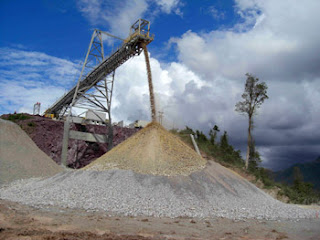 Photo by: BLOOMBERG
A copper mine north of Vientiane. The commerce minister said Cambodia's copper resource may be three times those seen in Laos.
via CAAI
Monday, 01 November 2010 20:22 Ellie Dyer
Cambodia is considering licensed exploration of a 13 million-tonne copper resource in Siem Reap province, in an area that contains 1,000-year-old historically protected sites, the Minister of Commerce has said.
Minister Cham Prasidh said that a decision on the exploration permit was due next week, after announcing the massive mineral resource during a speech to 33 delegates from the Singapore Chinese Chamber of Commerce and Industry at Raffles Le Royal Hotel in Phnom Penh.
“There are huge iron resources in Preah Vihear and in Siem Reap, huge copper resources. This copper could be three times what you see in Laos – 13 million tonnes is possible over the next 50 years,” he told the gathering.
The only “problem” he said was the presence of protected historical sites, some of which, he said, were 1,000 years old, which could be affected by mining.
“We have to protect [them] as well,” he added.
The minister said he had passed on an application for a permit to Prime Minister Hun Sen two weeks ago for consideration.
He later told reporters that a decision could be made next week. He did not answer requests to disclose the name of the firm or the exact location of the resource.
During a lunch for SCCCI – which was hosted by ANZ Royal Bank – the minister emphasised Cambodia’s energy developments, calling for further investment in renewable energy.
“Nuclear energy is something we would like to explore too,” he said.
He also detailed potential revenues from ongoing extraction projects, stating that the government would draw US$700 million a year from Chevron-controlled Block A – an offshore oil concession in the Gulf of Thailand that the minister said had been given a production deadline of December 12, 2012.
A Chevron spokesman declined to comment on individual project revenues.
The future of Cambodia’s energy supply was also a point of discussion for potential investors, who are taking part in a fact-finding mission.
Thomas Chua Kee Seng, vice-president of the SSSCI, was largely positive about the prospect of Cambodian investments, stating that many delegates were seriously assessing opportunities in the Kingdom – which could be poised to take advantage of rising labour costs in China.
Agriculture, infrastructure and labour-intensive manufacturing beyond the garment industry were of interest, he said.
However, he said that the high cost of electricity “could be one of the obstacles for businessmen when making a decision [to invest]”, and that it was an issue for each individual to decide upon.
Several officials from the Ministry of Industry, Mines and Energy could not be reached for comment. Bun Narin, director general of the Apsara Authority, which runs the Angkor Wat complex in Siem Reap province, declined to comment on the issue.
Posted by CAAI News Media at 11:39 pm