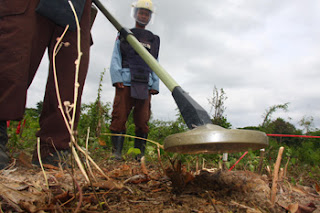 Photo by: Heng Chivoan
Deminers clear an area of mined land in Battambang province in April.
via CAAI
Sunday, 31 October 2010 20:14 Buth Reaksmey Kongkea
A total of 223 people were reported killed or injured by landmines and explosive remnants of war in the first nine months of this year.
This represented an increase of 11.5 percent on the same period last year, according to figures released by the Cambodia Mine/ERW Victim Information System.
Of the 223 casualties recorded, 49 were killed, 39 lost limbs and 135 were otherwise maimed, according to the group’s September report.
CMVIS recorded 16 new casualties from 10 mine or ERW accidents in six provinces for the month of September, representing an increase of 14 percent compared with the 14 casualties recorded in September last year.
Leng Sochea, permanent deputy secretary general of the Cambodian Mines Action Authority, which manages CMVIS, said one possible reason for the higher number of casualties this year was that electrical workers had been increasingly unearthing mines and unexploded ordinance while installing power cables, and that explosives found were often not disposed of safely.
Meanwhile, more than 50 landmine and ERW survivors gathered along with civil society representatives for a boat cruise in Phnom Penh, calling on the government to sign the 2008 Convention on Cluster Munitions.
A meeting of state parties to the convention opens in Laos on November 9.
Posted by CAAI News Media at 12:00 am