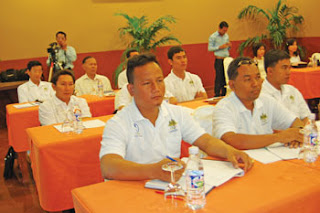 via CAAI
Tuesday, 02 November 2010 15:00 H S Manjunath
The significance of science and medicine as pillars for the creation of a healthy and competitive sporting environment was the main thrust behind expert presentations on the opening day of the Sports Medicine course in Siem Reap yesterday. The National Olympic Committee of Cambodia, in collaboration with the International Olympic Committee, organised the four-day crash course to allow 27 participants gain useful knowledge from field experts representing six ASEAN neighbours. 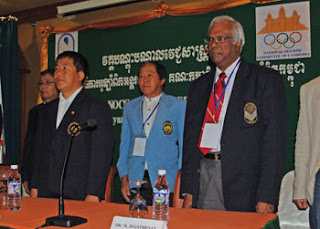 Cambodia is the seventh country in Asian region – after Nepal, Indonesia, Tajikistan, Sri Lanka, Bahrain and North Korea – to hold the prestigious course.
The Chairman of the Olympic Council of Asia’s Sport Medical Commission, Dr M Jegathesan from Malaysia, emphasised in keynote remarks the crucial role the fast advancing field of sports science and medicine played in capacity building of a nation. He said this amazing branch of medicine had the power to change the health status of the population in general, while giving the sporting fraternity a definite edge in sporting excellence.
“For a developing country like Cambodia, advancement in sports science and medicine is critically important. I am glad that the country is conducting this course for the first time,” said Dr Jegathesan, who is a major voice in the propagation of sports medicine in the Asian Continent.
The President of the Cambodia Sport Medical Commission, Dr Sdoeung Chea, said the country was privileged to hold a course as important as this, adding it would be the CSMC's endeavour to keep the momentum going in the future.
NOCC Secretary General Vath Chamroeun also underlined the importance of the seminars in his address at the opening ceremony, noting it would be a great opportunity for the Kingdom’s athletes and coaches to enrich their knowledge of this specialised field. “It enables us and empowers us to confidently seek better sporting standards, and will also help us to deal with such societal problems as drugs and doping,” he said.
“More importantly, any advancement in the field of sports medicine would be additional benefits in our bid to host the SEA Games in either 2015 or 2017. We are one of the founder members and we have not been able to stage the games so far. I am confident this course will be a forerunner for positive change and will help us mobilise the much vaunted human resources.”
Yesterday opening sessions were held in two parts. There were riveting presentations from Dr Jegathesan on the Olympic Movement Medical Code, World Anti Doping Agency's Anti-doping Code and the health consequences of doping. Dr Ronnie Yeo, also from Malaysia, then dealt with topics such as pre-sports participation and the principles of sports injury rehabilitation.
The course concludes at the Hotel Cozyna Angkor on Thursday with a three-tier workshop and an evaluation.
Posted by CAAI News Media at 11:48 pm