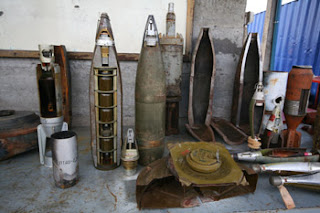 Photo by: Tracey Shelton
Remnants of cluster bombs and other forms of unexploded ordnance, displayed in Kampong Chhnang province in 2008.
via CAAI
Monday, 01 November 2010 21:09 Brooke Lewis and Buth Reaksmey Kongkea
Cambodia had apparently scrapped plans to send a delegation to the first meeting of countries that have ratified a convention banning cluster bombs, organisers have said.
Set to begin in Vientiane on November 9, the meeting will bring together delegations from at least 96 governments, according to a list updated over the weekend by the Cluster Munitions Coalition, an advocacy group.
The same list also states that “Cambodia has now indicated it will not be able to participate”.
The government was an early champion of the convention, which came into effect on August 1, but has since refused to sign it, citing the dispute with Thailand over land near Preah Vihear temple and other reasons.
Government officials have offered conflicting statements over the past few days when asked whether a delegation will be sent.
Leng Sochea, deputy secretary general of the Cambodian Mine Action Authority, last week said he had heard that officials would be barred from attending.
“I just heard this news yesterday that there were instructions from the high level [for Cambodia] not to attend,” he said on Thursday.
But Chhum Socheat, spokesman for the Defence Ministry, said that he had assumed Cambodia would attend and had not heard anything to the contrary.
“So far I do not have detailed information about the first meeting of state parties in Laos, but as far as I know Cambodia will attend it,” he said.
Advocates expressed disappointment over the fact that no delegation had been registered, though they remained optimistic that one would ultimately make the trip.
CMC coordinator Thomas Nash emphasised that there was still time for the government to register, and urged it to do so.
“It would be a shame for Cambodia to miss out on the opportunity to participate in this historic meeting of the Convention on Cluster Munitions in Vientiane next week, and it’s not too late for the Kingdom to confirm its attendance,” he said via email.
“Cambodia was a leader on the international treaty banning land mines, and particularly as a country also heavily affected by cluster bomb use, it has so much to gain by joining other affected states and donor governments to plan how this new Convention will be implemented to save lives and stop the suffering caused by cluster bombs.”
The convention requires state parties to immediately end the use, production and transfer of cluster munitions. It also requires them to destroy any stockpiles of cluster munitions within eight years of joining the convention, to clear land contaminated by cluster munitions within 10 years, and to provide assistance to victims.
Once a supporter
In March 2007, the same month Phnom Penh hosted the first regional forum on cluster munitions, the government announced it would join the Oslo Process, under which states agreed to establish a legally binding instrument prohibiting cluster munitions before the end of 2008.
A report released in Bangkok by the CMC noted that Cambodia had actively participated in international conferences to develop the text of the convention, and that officials had “advocated strongly for the most comprehensive and immediate ban possible”.
But when the convention was opened for signatures in December 2008, Cambodia decided not to sign, saying that “recent security developments” in the region had made it necessary to study “the impacts of the convention on its security capability and national defence”, according to the report.
Defence Minister Tea Banh reiterated that position, saying: “We did not reject to sign the convention on banning cluster munitions, but we cannot decide immediately because it is complicated. We need more time to study on it.”
Information Minister Khieu Kanharith said last week that Cambodia could not sign the convention “due to the fact that neighbouring country Thailand has not yet signed it as well”.
The CMC report said the Kingdom “is not believed to have used, produced or exported cluster munitions”, and that the size of its stockpile was unknown.
It also said Thailand had been reluctant to sign the convention because of the cost involved in destroying its stockpile. Nash of the CMC noted that both Thailand and Vietnam had committed to sending delegations to the Vientiane meeting.
Jeroen Stol, country director for Handicap International Belgium, which is sending staff to the meeting, said it was unclear whether the government’s position on the convention had changed, but that the presence of a government delegation would “at least keep [ratification] on the table”.
“For a country like Cambodia that has been so much affected by cluster munitions it would be good just to be there,” he said. “It would be easier for us if they at least send someone to Laos.”
Denise Coughlan, director of Jesuit Refugee Services, said she believed Cambodia had originally intended to attend. “They were going to go but they cancelled their registration,” she said.
“But nobody knows why.”
ADDITIONAL REPORTING BY SEBASTIAN STRANGIO AND SAM RITH
Posted by CAAI News Media at 11:36 pm