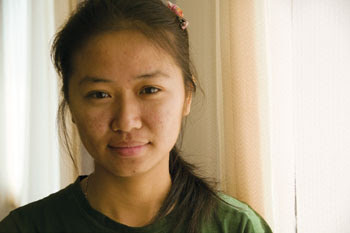 Photo by: HENG CHIVOAN
Boeung Kak resident Nhoem Ray at a protest against eviction in Phnom Penh on Monday.
The Phnom Penh Post

LOCAL rights groups are becoming increasingly concerned over the recent spate of arrests of community organisers, with the leaders of nine land-grabbing resistance groups arrested across the Kingdom in the last week.

"Community representatives continue to be arrested, charged and imprisoned because of their efforts to assist fellow villagers to protect their land," said Kek Galabru, president of the human rights group Licadho.

"Frequently there is no evidence whatsoever for the charges against them - the law is simply misused as a weapon to try to intimidate their communities into giving up land."

The recent arrest cases are unsettling as two of the charges against six of the arrested have been discovered to be unfounded and inaccurate, according to a Licadho investigation.

Six people arrested in Kampong Thom province on October 22 were the representatives of 1,300 families who are facing a land dispute with a Vietnamese company, Tin Bean Co. All six have been released, although only three have been formally charged.

In Svay Rieng province on October 23, two community organisers - Sum Oeung and Tia Khun - representing thirteen families, were arrested and have been charged with damaging private property. They are in detention.

A further four community organisers representing forty families were arrested in Siem Reap province Friday, and have been sent to pre-trial detention. The men in this case were charged with using violence, but according to Licadho's investigation, the accusations are incorrect.

International human rights group Amnesty International and the Asian Human Rights Commission have added their voices to the escalating concerns about the detention of community organisers.

"Such action is pre-meditative. It is used to scare other provinces from rising up and protesting," he said.

Son Chhay said such acts would continue as long as the justice system remained dependent and always supported those in positions of power and authority.
Posted by CAAI News Media at 10:22 pm