Petrol price drops 400 riels in one day on falling crude 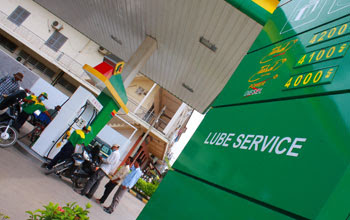 Photo by: Heng Chivoan
Motorists filling up at a Tela petrol station in Phnom Penh.
The Phnom Penh Post

THE price of petrol in Phnom Penh dropped 400 riels per liter on Wednesday following steep declines in global crude costs.Oil prices struck record highs above US$147 per barrel in July before plunging this week to about $64 on falling demand.

Chhun Oun, managing director of Tela Cambodia, could not be reached for comment.

Sokimex premium petrol fell 100 riels to 4,400 riels, with Caltex premium off by 50 riels, dropping to 4,550 riels also on Wednesday morning.

Heu Heng, deputy director general of Sokimex, said Sokimex petrol dropped further to 4,100 riels by Wednesday afternoon. "We want people to have cheap petrol and we will continue to lower the price if the international market remains as it is today," Heu Heng told the Post.

"We won't let our price be higher than other companies," he said.

Finance Minister Keat Chhon recently said the government plans to keep its cap on taxes on fuel imports in a bid to stabilise the oil price - a move officials say cost the government hundreds of millions of dollars a year in lost tax revenue.

In the first nine months of 2008, the government says it has forgone about $263 million in import tax revenues under the plan.

Petrol demand in Cambodia rose to about 150,000 tonnes in the first half of 2008, compared with 116,300 tonnes for the same period last year, according to Customs and Excise Department figures.

"I really appreciate that Tela Cambodia has dropped its price by 400 riels. Other companies should consider dropping the price to align with international markets too," he said, adding that the price of petrol should be 3,000 riels per litre."

The Ministry of Economy and Finance should have a better measurement scheme and order companies to lower their prices," he said.

"[The government] has shares in petrol companies - that is why companies can increase and drop the price as they like."

Phnom Penh resident Met Vanna said the price of petrol is still too high, even with the drops.

"I don't know why the price of Tela petrol dropped so quickly, while Caltex dropped so slowly," he said.

"I think the price of commodity goods should be cheaper than today," said Met Vanna.
Posted by CAAI News Media at 9:50 pm