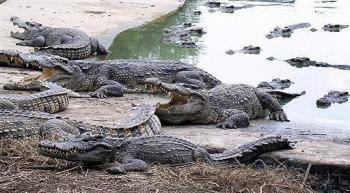 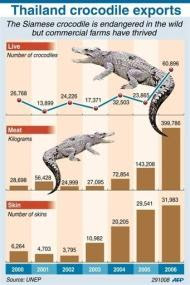 BANGKOK (AFP) — As deforestation and a loss of natural prey threatens Siamese crocodiles with extinction, the farms that once helped endanger the species are now helping save it, conservationists say.

There are fewer than 50 Siamese crocodiles left in the wild in Thailand and about 200 in the entire Mekong river region, but thousands live on commercial farms designed to transform them into belts, shoes and handbags, or meat for export.

"(People) hunt the young to sell to the crocodile farms. For the big ones, they hunt for the skin, the hide," says Chavalit Vidthayanon, a freshwater specialist with conservation group WWF.

Thailand's crocodile farming has over the past six years expanded into a booming multi-billion-dollar industry, with tens of thousands of crocodile skins and live crocodiles, as well as the reptile's meat, sold worldwide each year.

Much of the skins end up as handbags, wallets or shoes on chic consumers in Asia and the West.
The dark green, three-metre (10-foot) long Siamese crocodile begins life at one of the dozens of farms along the Mekong river.

The conservation group Fauna and Flora International says the farms are to blame for the extinction of the Siamese species from 99 percent of its natural habitat.

But now the industry is helping preserve the rare reptile and deter smuggling, says Wuthiphong Thaolar, a Thai customs inspector and member of the Association of Southeast Asian Nations' Wildlife Enforcement Network.

There are 22 farms in Thailand that are legal and approved under the CITES global treaty on trade in endangered animals.

This makes smuggling wild crocodiles into Thailand from neighbouring countries such as Cambodia a less attractive proposition, says Wuthiphong.

Poaching of wild Siamese crocodiles appears to be more of a problem in Cambodia, where Fauna and Flora International say there are thousands of unregulated, illegal farms, and just a handful of legal ones.

Cambodian farmers will almost 2,000 dollars for a mature wild female, the group says, which represents around half a year's income for many Cambodians.

Efforts to re-introduce the animal to the wild in the region have been "quite far from successful," says WWF's Chavalit.

Water pollution has killed the fish the young Siamese crocodiles eat in the wild, while deforestation and hunting have reduced populations of monkeys and deer that the mature reptiles favour.

Many farms are inter-breeding the Siamese crocodile with the saltwater crocodile for a higher-quality hide and superior growth rate, but this makes the animals useless for re-introduction to the wild, conservation groups say.
Posted by CAAI News Media at 7:50 am