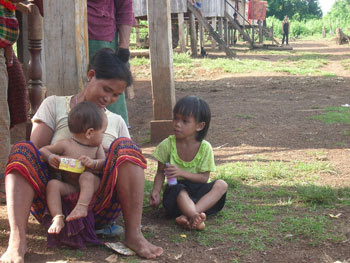 Photo by: SEBASTIAN STRANGIO
Kong Yu residents relax after a long day tilling their communal farmland in Ratanakkiri, which Keat Kolney claims to have purchased in 2004.
JUDGE APPROVES KONG YU INJUNCTION
Thor Saron, vice president of the Ratanakkiri provincial court, approved an injunction Tuesday forcing Keat Kolney's Progressive Farmers Association to stop clearing of the remaining 170 hectares of farmland that residents of Kong Yu village claim belongs to them. The company started clearing the land October 23, in apparent contravention of a 2007 legal agreement that work would be suspended until the court handed down its verdict. "I have issued an injunction to ask the company of Keat Kolney to postpone clearing the disputed land until the case is completely solved through legal means," Thor Saron said Wednesday.

An agricultural boom has spurred the approval of illegal land concessions in Ratanakkiri province, which local advocates say are threatening the livelihoods of indigenous minorities

RATANAKKIRI PROVINCETHE Toyota Landcruiser arrives in the village just as the morning sun breaks through the trees, casting long shadows across the rust-coloured earth. After exchanging a few quiet words with the driver, half a dozen young villagers - no more than teenagers - get into the vehicle, which pauses for a moment and then roars away, trailing clouds of dust.

According to residents of this small Jarai community in Ratanakkiri's O'Yadao district, young people are picked up each day and taken to pick beans on a nearby rubber plantation - a change to traditional farming practices that is a worrying sign for the community.

Although the Jarai of Kong Yu village appear to have successfully absorbed the more visible signs of modernisation - from motorbikes and baseball caps to artesian wells and laundry soap - indigenous rights activists say an epidemic of land-grabbing threatens the livelihood of the community, and others across the country.

Kong Yu representative Sev Twel said that since losing ancestral farmland to a controversial land deal in 2004, many villagers have been forced into day labour in order to survive.

"Most of the people in my community right now have enough crops for just half of the year," he said. "Then they have to work for others in order to support their families for the rest of the year."

The Kong Yu villagers have been fighting for their land since August 2004, when Keat Kolney, the sister of Finance Minister Keat Chhon, claimed to have purchased 450 hectares of land from the villagers. But Kong Yu residents say they only agreed to the sale after commune authorities told them the land was needed for disabled army veterans.

Villagers subsequently signed documents approving the sale, but maintain they only agreed to sign away 50 hectares of land, rather than the 450 claimed by Keat Kolney's Progressive Farmers Association, which has since planted rubber trees on 270 hectares of the land.

In 2007, lawyers for the Kong Yu villagers filed legal complaints, but following inaction by the presiding judges, some Kong Yu residents despaired that they would never regain their land.

Kong Yu village chief Romass Neath said he is now tired of fighting because his attempt to petition the courts has borne little fruit. "We would speak one word, and [the judges] replied with 10 words," he said. "They have more power and rights than us."

Tim Sinath, director of the provincial Land Management Department, said Ratanakkiri had experienced few cases of land-grabbing compared to other provinces. "Since 2004, we have received only 47 land dispute cases throughout the province and those cases are very small," he said.

But local officials and rights groups say that land disputes have risen in Ratanakkiri, driven by a frenzy of land speculation that has seen the value of nutrient-rich ancestral lands spiral upwards.

Thor Saron, the presiding judge in the Kong Yu case, said he has seen a marked increase in the number of land dispute cases brought before the court in the past year.

Lawyers from the Community Legal Education Centre (CLEC) say that the residents of four Jarai villages affected by the clearing were not informed about the development.

CLEC sources are also concerned about government plans for the development of Yeak Loam, a volcanic lake near Banlung. Tin Luong, chief of Yeak Loam commune, said provincial authorities had invited him in June to discuss the development potential of the lake, which is maintained by the string of minority Tumpuon communities that ring its shores.

Around 1.5 percent of Cambodia's population - around 220,000 people - are indigenous minorities, according to the government's Department of Ethnic Minority Development. But while minorities form the biggest population in Ratanakkiri, rights groups said that they are vulnerable to land-grabbing because of linguistic and cultural differences.

For instance, Dam Chanthy, director of the Highland Association, noted that the idea of individual ownership did not dovetail well with the communal land use practised by minority groups, and that land-grabbers were using this to their advantage.

"Usually, the dispute happens on the community's land because someone in the community sells the land without informing the other members," she said.

Ngy San, deputy executive director of the NGO Forum, agreed that the isolation of such communities made them more vulnerable to exploitation.

"Most indigenous minorities do not get much information from the outside world, about land prices or the contents of the Land Law. It is easier for outsiders to manipulate the situation," he said.

The land of ethnic minorities is nominally granted protection under Cambodia's 2001 Land Law, which states that "no authority outside the community may acquire any rights to immovable properties belonging to an indigenous community".

The law also states that the community "does not have the right to dispose of any collective ownership that is state public property to any person or group" - a point that CLEC lawyers claim invalidates the Kong Yu purchase.

"The law says that community land is state land before it is registered, but there is a condition that this state land cannot be sold because it is controlled by indigenous people," said Ly Ping, a CLEC lawyer working on the Kong Yu case.

However, the subdecree necessary to enable the registration and delineation of indigenous lands is yet to be drafted.

Chhan Saphan, secretary of state in the Ministry of Land Management, Urban Planning and Construction, told a gathering of donors in March that a sub decree had been drafted and circulated to stakeholders for consultation.

Tim Sinath added that he had been involved with land registration pilot projects in two local villages, the lessons of which would be incorporated into the draft subdecree, which he expected to be passed and approved in 2009.

But Ngy San said that the lack of an enabling subdecree permitted a highly selective implementation of the Land Law.

"Many articles of this law require subdecrees," he said.

"It is a problem with many laws in Cambodia. Until there is a subdecree, the law cannot be implemented in detail. What I know for sure is that the Land Law is not enough," he said.Others have expressed concern about protection for indigenous lands in the interim.

"We are concerned that if the drafting and implementation of the subdecree drags on for too long ... indigenous communities will continue to lose their lands to economic land concessions," Christophe Peschoux of the UN's human rights office, said Monday in his opening address to the National Forum on Indigenous People.