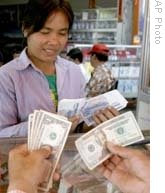 One of the clearest sectors in Cambodia to be hit by the global credit crunch will be microfinance, limiting loans for small businesses among Cambodia’s poorest at a time when the system is just taking off, financial experts say.

The financial crisis that spread from a US mortgage meltdown and has shaken global markets will take money away from the international lenders that make microfinance possible, leaders of several Cambodian microfinance institutions said in recent interviews.

For Cambodia’s rising number of microfinance borrowers—mostly the rural poor who take small loans to start or expand local businesses—that means less money to go around and higher interest rates to pay back.

Micro-lender Amret will cut 10 percent of its loans to the poor in the coming year, the institution’s general manager, Chea Phalarin, said.

“We will reduce our mission in response to less foreign resources,” he said. “We will cut down the number of lenders.”

Amret had expected to make small loans to around 250,000 families in 2009, he said, but that number has been cut to an estimated 230,000. An extended financial crisis could mean even less people will be eligible for loans, he said.

Sem Senacheat, general manager of Prasac, a microfinance lender, said it will be a hard task now to find foreign lenders. Prasac has already seen a $10 million loan canceled thanks to the financial crisis.

“Loans that we had negotiated before were suspended by the lenders, and recently we have tried to contact many institutions we used to borrow from,” he said. “But most of them can’t offer us the money.”

Foreign lenders that can afford to make loans are doing so at higher interest, experts said, raising rates from an average 9 percent to as much as 11 percent. The higher interest will be passed on to borrowers.

An estimated 1 million Cambodians are benefiting from microfinance programs, up 73 percent from the beginning of 2008. The country has 17 microfinance institutions with a total capital of $270 million, typically loaned to rural villagers for small-sized businesses.

Chea Chanto, governor of the National Bank of Cambodia, has called microfinance the key to reducing poverty in rural areas.

But a slowdown means “people who need money to create new businesses or extend their businesses will be hurt,” said Kang Chandararoth, director of the Economic Development Institute.

Now, he said, microfinance lenders will have to amass local deposits, something local lenders say will be limited and far from able to reach the amounts of money foreign lenders can provide.

Micro-lenders also say they can’t seek loans from local commercial banks, because these are still not confident with microfinance systems.

The National Bank can’t help either; its reserves are too small.

This will be hard as well, micro-lenders said. Lenders like the IFC or Asian Development Bank usually offer loans with higher interest rates, which would hurt borrowers.

For now, lenders are waiting to see how long the credit crunch will last.

“If the global financial crisis is not resolved as soon as possible, I am concerned that there will be a crisis in 2009," said Bun Mony, chairman of the Sathapana microfinance institution. “It means that our mission will be reduced to its lowest point.”
Posted by CAAI News Media at 6:49 am