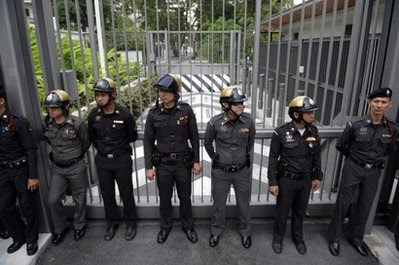 October 30, 2008: The stand-off between the elected government, and urban elitists continues. The urban coalition, which includes the commanders of the armed forces, monarchists, academics and business leaders, hasn't got the votes to get elected to run the country, and resents the populist politicians who have. The urbanite mobs continue to hold large demonstrations in the capital, but the military is reluctant to stage another coup. The military is, however, asking the current prime minister to resign, and to allow the military a say in who the next prime minister (chosen from the majority party) will be.

October 29, 2008: Violence between the minority elitist political parties (mainly the PAD, or People's Alliance for Democracy), and the majority parties is escalating. Today a bomb was tossed into the camp of elitist activists, injuring ten. A grenade was thrown at the home of a judge, and a man was found shot dead near the site of frequent elitist demonstrations.

October 27, 2008: The government is spending $15 million on software to block access to websites that insult the Thai monarchy. The king and his family is very (but not universally) popular within Thailand.

October 21, 2008: In the Moslem south, five people were killed, either by gangsters or Islamic terrorists.

October 18, 2008: In the Moslem south, three people were shot and killed, including an Islamic cleric.

October 17, 2008: Noting its clear military inferiority to neighboring Thailand, Cambodia is doubling its annual military budget to $500 million. Thailand spends more than six times that, and has done so for decades. Thailand has 300,000 troops, Cambodia only 100,000. The recent military confrontations on the border made it clear to the Cambodians that they would likely lose any war with Thailand. Doubling the defense budget won't change that, and peace talks to settle the matter continue.
Posted by CAAI News Media at 10:33 pm