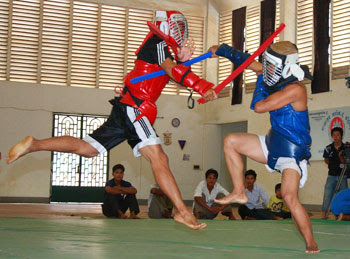 Bokator fighters compete at Olympic Stadium Tuesday, the second day of the national championships of Cambodia's martial art, which pairs graceful, animal-like moves with sudden eruptions of violence. Grand Master Sean Kim San said this year's entrant numbers are down due to the rising cost of transport and travel expenses, but said that aside from the competition, there will be demonstrations of different styles of Bokator fighting to try to encourage Phnom Penh residents to get involved in the sport.
Posted by CAAI News Media at 7:02 am