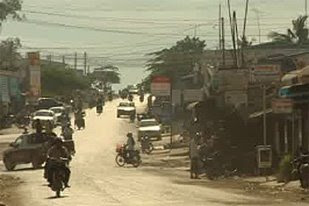 It is said that in life there are only two certainties – death and taxes. But Cambodia could add a third – the road to Pailin is always difficult.

Stretching 83 back-breaking kilometres west from Cambodia's second city of Battambang it seems the road has always been in a potholed state of disrepair.

A decade ago it was pitted with deep craters from years of fierce fighting between Khmer Rouge forces and the Cambodian armed forces.

Both sides of the track littered with danger signs warning of landmines. The journey took a mind-rattling five hours.

In the intervening years it has been repaired, the ruts from rainy season damage rolled flat, the travel time quickened, only for the wheels of countless heavy trucks bearing timber and other goods to tear it apart once more.

Now the road is in upheaval again - this time for the better - as Chinese money pays for it to be completely rebuilt, with sturdy new bridges and drainage channels to replace the rusting steel and timber structures that have somehow held together all these years.

The reconstruction of Route 57 to Pailin reflects Cambodia’s own struggle to reconcile with its bloody history and that of its former Khmer Rouge leaders, many of whom made Pailin their home.

In late 1998 Nuon Chea, the Khmer Rouge's Brother Number Two, and the former Head of State Khieu Samphan had just come out of Pailin’s jungles to meet Cambodia's prime minister, signalling a final end to years of hostilities between the last remaining Khmer Rouge guerrillas and the government.

Pol Pot, the Khmer Rouge's former leader, had died earlier the same year while held under house arrest by his former military commander, Ta Mok, a man known to many as "the Butcher".

Change in the air

A decade later, Pailin is still the dusty frontier town it has always been, with ramshackle buildings, a bustling market and a few dubious-looking restaurants.

But change is in the air. A new Honda motorbike dealership is doing brisk trade, a Suzuki store is opening soon. Lockups compete to sell the latest mobile phone and all along the road from Pailin to the Thai border 15 kilometres away, construction is under way.

Down at the border there are duty free shops selling wines, cigarettes and liquor. Bright lights flash from the casinos attracting gamers from the other side of the international crossing.

The teak forests and thick bamboo groves that used to surround the town have disappeared, replaced by hectares of flat land given over to farming. 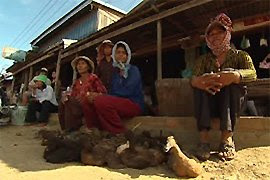 Pailin's population has tripled in the past decade

The gem mining that once funded the Khmer Rouge war effort has also gone, as have the people scrabbling behind earthmovers hoping to find a ruby or sapphire chip they could sell for a few riel or baht.

The forested track I first walked tentatively down with a TV crew to try to confront Nuon Chea and Khieu Samphan in early 1999 is now unrecognisable.

Only the concrete post that supported a bamboo pole barring the path to the leaders’ homes remains to mark the way.

At the time there was a guard post manned by a Khmer Rouge soldier with an AK47. As we approached he furiously dialled his war-time field telephone.

Minutes later another soldier appeared brandishing a rocket launcher and a rack of five grenades. We were being warned.

Two cars with blacked-out windows appeared and sped past heading for the Thai border. 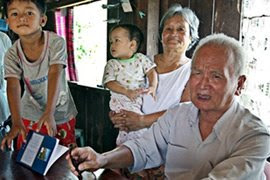 Perhaps Nuon Chea and Khieu Samphan were inside, but we did not hang around to find out.

It would be another eight years and four more trips to Pailin before I came face to face with Nuon Chea, when the ageing former Brother Number Two finally agreed to talk to Al Jazeera in June 2007.

It was one of the last interviews he did before being detained by the Extraordinary Chambers in the Courts of Cambodia or ECCC – the hybrid United Nations-Cambodian body that will try the former Khmer Rouge leaders.

The journey to Pailin from Battambang then took just two hours, but the ECCC still took Nuon Chea south by helicopter.

He left behind many other former Khmer Rouge members, among them Kong Duong a pleasant, smiling man, who is now Pailin's chief information officer.

He is also the former boss of Pailin radio – a station which ironically used to broadcast the songs of a popular female singer who was herself murdered by the Khmer Rouge.

Kong Duong says he only joined the Khmer Rouge in 1979, after the invading Vietnamese army forced the group from power. He fled into the jungles to fight for the country’s liberation.

But he is no fan today of the Maoist extremism which the Khmer Rouge used so ruthlessly to all but destroy Cambodia's people.

Now in his new role as Pailin's information officer he is helping to transform the town.
"Pailin has moved on," he insists.

"The development of capitalism is a good thing. When we lived under communism the aim was equality, no-one wanted to compete. People were poor then because there was no competition. Capitalism is good for development because people work hard and compete."

One of those signing up to Pailin's new capitalist work ethic is Kiet Boren, a casino worker from Battambang who came to Pailin 10 years ago, seeing the opportunity to make money in a 'new province'. 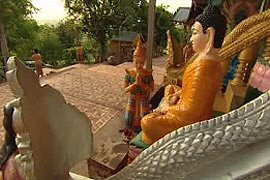 After decades of war, Pailin is keen to present a new face to the outside world
Kiet Boren is just one of the thousands of migrants who have helped boost Pailin’s population three-fold in the last 10 years.

He says he plans to use the money he's making to start up his own business in the future.

Like many people here he knows about the Khmer Rouge trials only just beginning in Phnom Penh after years of delays, but he does not spend much time thinking about it.

Kong Duong agrees. "I don’t think the priority for people here is justice or the Khmer Rouge trial," he says.

"Their priority is daily life, and whether they can sell their cassava at the market, or earn enough money to send their kids to school."

The new road to Pailin is due to be finished towards the end of next year, which may just coincide with the start of the second Khmer Rouge trial, predicted to include all five surviving leaders.

Just like the physical road, after years of delays Cambodia's long road to justice is finally nearing completion.
Posted by CAAI News Media at 8:25 am