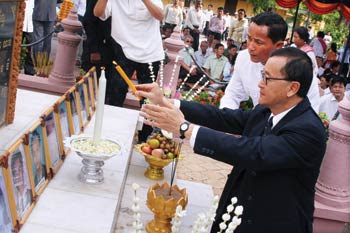 HUNDREDS turned out for a commemoration Monday marking the 12th anniversary of the 1997 grenade attack that left at least 16 dead and more than 100 injured during a peaceful opposition rally in Phnom Penh.

During a two-hour ceremony held at the commemorative stupa marking the site of the attack near the former National Assembly, participants lit incense and laid wreaths next to photos of 13 of those killed, while lawmakers and victims' relatives issued calls for fresh investigations into the still-unsolved case.

SRP President Sam Rainsy, who was injured and whose bodyguard was killed during the 1997 rally, slammed the government for its inaction but expressed hopes that investigations conducted by the US Federal Bureau of Investigation would succeed where it had failed.

"The criminals must not be hidden by the powerful," he told the crowd. "I believe the Obama administration has clear principles of justice [and] we hope that the US can send the people behind the grenade attack to jail."

Ly Nary, who lost her journalist son Chet Doung Daravuth in the attacks, appealed to the government to continue its investigations and said she looked forward to seeing the attackers in the dock.

"We should take [such] impunity away from our society," she said in a speech.

"We have waited for 30 years to see leaders of the Khmer Rouge face trial, so we will continue to wait [for progress on the grenade attack]."

But Peo Heng, 62, whose daughter Yung Soknov and niece Yung Srey were killed in 1997 after joining the rally to demand higher wages for garment workers, was less confident time would reveal the perpetrators of the attack.

"Twelve years on, there remains no justice," she told the Post. "My daughter and niece did nothing wrong. They just participated in the rally to call for an independent court and demand a salary rise."

On March 30, 1997, four grenades were thrown into the crowd at a rally held by the opposition Khmer Nation Party, killing and injuring scores of bystanders.

While the results of a subsequent FBI investigation of the incident have never been made public, Sam Rainsy said a copy of the report leaked to Washington Post reporters pointed to the involvement of Brigade 70, Prime Minister Hun Sen's personal bodyguard unit.

He expressed confidence that while the Cambodian government had not managed to find the killers, a new era of international legal norms could bring the country's entrenched impunity to an abrupt end.

"The President of Sudan, who is currently in power, is afraid to leave his country, and he will be arrested if he visits any European countries," he told journalists after the ceremony, referring to the leader's recent indictment by the International Criminal Court in The Hague.

"This trend will come to Cambodia."

Sustained impunity
Other observers who spoke with the Post agreed the government had demonstrated no clear commitment to the case.

"I think the fact that 12 years have passed since the grenade attacks and the government has yet to launch an independent investigation or make a single arrest is a clear indication that impunity continues to plague Cambodia," said Sarah Colm, a researcher for Human Rights Watch.

Colm added that some of the figures suspected of involvement in the attacks, including the head of Brigade 70, had since been promoted by the government, describing the appointments as a "slap in the face" for the victims.

"Rather than going after the perpetrators of political violence or human rights abuses, some of the very [military] units and people alleged to have been involved in the attacks are this year being promoted," she said.

While the trials of senior Khmer Rouge figure Duch, which reconvened Monday, was a vital step in the erosion of the Kingdom's culture of impunity, Colm said it was vital that ongoing violence and intimidation was also "promptly and fairly" addressed.

"These more recent crimes are not isolated incidents," she said.

SRP spokesman Yim Sovann agreed, saying the party would continue holding an annual commemoration on March 30 until the attack's "perpetrators and masterminds" were brought to justice.

"There is no political will or commitment to conduct a serious investigation," he said.

"With the assassinations of political opponents or union leaders, they always make up another story to cover up the truth."

Minister of Information Khieu Kanharith could not be reached for comment Monday but told the Post last week that the government was still conducting investigations with the help of the FBI, and that three suspects had so far been identified in connection with the attacks.

"As long as we can wait, we will try to shine a light on the perpetrators," he said.

However, US embassy sources said the FBI had closed its case and was "not able to reach a conclusion" as to the perpetrators of the attacks.

"We extend our sympathies to the families of the victims of the attack and note with regret that the perpetrators of the attack have not been brought to justice," embassy spokesman John Johnson said by email.

"The victims and their families deserve justice, and we urge the Cambodian government to make every effort to solve this case."
Posted by CAAI News Media at 11:19 pm