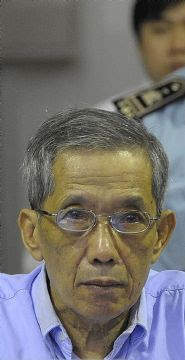 As hundreds of Cambodians crowded into a courtroom today to see the chief torturer of the Khmer Rouge finally brought to trial, a lawyer in Britain quietly got on with her work. Only those closest to her know how, 30 years ago, Kang Kek Ieu, alias Comrade Duch, destroyed Hilary Holland’s family.

In 1978 Ms Holland’s brother, John Dewhirst, aged 26, was captured by the Khmer Rouge and sent to be tortured and killed at Tuol Sleng, the regime’s infamous prison. He was the only Briton among 17,000 Cambodians to die at the prison. Three decades on, as Cambodia watches the first trials of the Khmer Rouge’s leaders, his fate continues to devastate his sister.

"The horrific circumstances and the manner of how John was killed still makes it so difficult to cope with," Ms Holland told The Times from her home in Cumbria.

The young Newcastle teacher had been sailing through the Gulf of Thailand with two friends in July 1978 when their boat was intercepted by a Khmer Rouge patrol boat.

The boat’s skipper, Stuart Glass, a Canadian, was killed instantly. John and the other crew member, Kerry Hamil, a New Zealander, were sent to Tuol Sleng, a former school turned into a torture centre presided over by Duch.

They were tortured until they “confessed” to being CIA agents and taken to Cheong Ek, a pretty orchard on the outskirts of Phnom Penh. There they were bludgeoned to death with an iron bar.

Back in Britain Ms Holland was increasingly concerned at her younger brother's unusual silence, but it was not until she switched on the news one evening that she learnt he had become a victim of a regime she had hardly heard of. Shortly afterwards the Foreign Office called to tell her that John had been captured and imprisoned. He was almost certainly dead, they said.

The pain of that moment has never left her. "It was indescribable," she said. "I don't think I have got the words to explain how I felt. I used to think that if you could die from emotions like this I would have died.

Yesterday, in a wood-panelled courtroom on the outskirts of Phnom Penh, Cambodia's capital city, Duch identified himself quietly before charges of crimes against humanity, war crimes, premeditated murder and torture were read to a UN-backed war crimes tribunal.

He is the first of five former leaders of the Khmer Rouge to be brought to trial, 30 years after the fall of Pol Pot and his regime.

Nearly two million Cambodians died between 1975 and 1979 as Pol Pot pursued his ideal of an agrarian communist utopia. Tuol Sleng was the most notorious Khmer Rouge prison: of the 17,000 people sent there, only 15 are known to have survived.

Behind a bulletproof screen at the Extraordinary Chambers of the Courts of Cambodia, the 66-year-old former maths teacher who presided over their suffering listened impassively as the court was told that the sole purpose of Tuol Sleng – known by the Khmer Rouge as S-21 – was to kill its inmates.

According to the thick file of charges read to the court: "Every prisoner who arrived at S-21 was destined for execution. The policy at S-21 was that no prisoner could be released... prisoners brought to S-21 by mistake were executed in order to ensure secrecy and security."

During his trial Duch’s brutality will be described in detail. On his orders, victims were plunged head first into tanks of water, often drowning; they were given electric shocks to their genitals and their ear drums. The strongest were hooked up to intravenous pumps and literally bled dry.

It was cruel fate that delivered John Dewhirst into Duch’s hands. The carefree, adventurous young man had taken a break from his teaching job in Japan to go sailing with his two friends on their motorised junk Foxy Lady. Their boat drifted into Cambodian waters but, to the Khmer Rouge, their presence had no innocent explanation.

Yet even after she had heard of his incarceration in S-21 his sister hoped his friendly nature would help him to survive. "I thought if anyone could develop a personal relationship with his jailers, it would be him," she said. "I thought he would charm his way out of there."

She had no way of knowing that nothing could have saved him – although the meticulous Duch, who catalogued the details of all his prisoners, described him as a "polite" young man.

Before he died John was forced to write a detailed confession explaining how he was recruited and trained to be a CIA spy.

The confession, in Cambodian and English, entitled “Details of my course at the Annexe CIA college in Loughborough, England”, claims that John was recruited into the CIA by his father and from 1972 to 1976 was taught CIA techniques, including photographic skills and weapons-handling, by retired agents at his teacher-training college in Loughborough.

The confession, a mixture of the dull and the ludicrous, claims that Loughborough was one of six CIA colleges in Britain. Others, John wrote, were in Cardiff, Aberdeen, Portsmouth, Bristol and Doncaster. His college, he said, was run by “retired Colonel Peter Johnson” while the bursar was a CIA major.

Among many bizarre admissions was a claim that his father was a CIA agent whose cover was “headmaster of Benton Road Secondary School”.

The confession is signed and dated 5/7/1978. John's thumbprint sits along his signature. Like those made by thousands of innocent inmates at S-21, the confession was probably dictated by his interrogators on Duch’s orders.

Hilary Holland wants answers. She wants the Khmer Rouge leaders to admit their guilt and to explain why they destroyed so many lives. "There must be a public accountability," she said. "I would like it to be seen that they understand what they did. We still seem to know so little."

It is too painful for Ms Holland to attend Duch's trial, but she is relieved that after all this time the leaders will finally be brought to justice.

"No one is going to undo the horrors, but bringing these people to account is important. I don't care what happens to them but I would like them to tell the truth, to explain their motivation."

Duch, who was arrested in 1999 after being tracked down by a journalist, is alone among the defendants in expressing remorse and has agreed to co-operate with the tribunal.

At a procedural hearing last month, he made it clear through his lawyer that he would use his trial to apologise to his victims, although he did not expect “immediate” forgiveness.

His French lawyer, Francois Roux, said: "After ten years of prison at last the day is coming where he can in public respond to the questions."

But Duch cannot expect no forgiveness from Ms Holland. "People like Duch, who ordered the atrocities, were the worst," she said.
Posted by CAAI News Media at 8:11 am