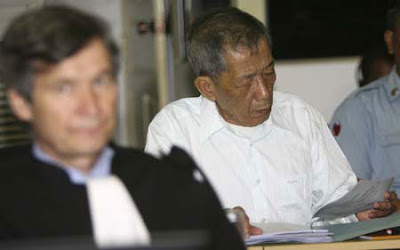 Chief Khmer Rouge torturer Kaing Guek Eav, also known as Duch (R), reads a document before his trial on the outskirts of Phnom Penh March 30, 2009. Duch faced trial for crimes against humanity on Monday, the first involving a senior Pol Pot cadre 30 years after the end of a regime blamed for 1.7 million deaths. [Photo: Xinhua/Reuters]

Charges were read at the court that he oversaw the death of some 15,000 people at his prison, which was called S-21 or Toul Sleng in Phnom Penh.

ECCC started trial in February against 66-year-old Duch, who faced charges of war crimes, crimes against humanity, grave breaches of the Geneva Convention of 1949, homicide and torture, as well as other offenses which are defined and punishable under the law of ECCC.

He was first detained by the order of provisional detention on July 31, 2007, and could face maximum term of life in prison if the charges were found true.

Duch was the first DK leader that ECCC put on trial. There are still four other senior DK leaders under detention at ECCC, awaiting their trials.

DK ruled Cambodia in the late 1970s and was widely believed responsible for the death of millions of Cambodian people.

ECCC was co-installed by the United Nations and the Cambodian government two years ago in order to put the surviving DK leaders on trial.
Posted by CAAI News Media at 8:04 am