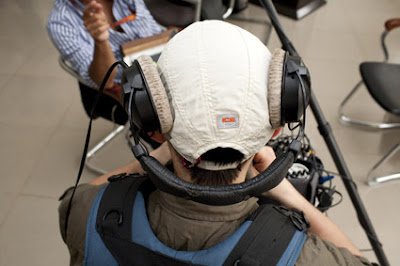 Kambol (Cambodia, Phnom Penh). March 30th 2009: Journalist during the reading of the accusations against Kaing Guek Eav, alias Duch, on the first day of his trial at the ECCC.
©John Vink/ Magnum

At the Khmer Rouge court, the first day of the substantive trial of Duch - the former director of the detention and interrogation centre S-21- was mainly marked on Monday March 30th by the analysis of facts and charges written down in the Closing Order of the co-Investigating Judges (Closing Order dated August 8th 2008 and amended by the pre-Trial Chamber on December 5th 2008). The hearing barely lasted four hours. The elements that were read out about S-21, the “smash the enemy” policy, the political line of the Communist Party of Kampuchea (CPK) behind the Khmer Rouge decision-making bodies and the description of conditions of detention of prisoners and torture sessions left the former revolutionary torturer unmoved.

Duch was dressed to the nines for the occasion. He sported a spotless white long-sleeve shirt and an impassive face as the list of physical abuse perpetrated on prisoners was read out. At the most, a wince came from time to time to disturb the wrinkles of the 66-year-old. When he took the floor, it is with a clear and distinct voice that he introduced himself or made an account of the many name changes he went through. With his classic and sober glasses, one could imagine the mathematics teacher he used to be. Conscientious, educated. Every time he spoke to the court, he joined his hands out of respect. And when the court clerk read out the Closing Order, he followed every sentence, straight-faced and focused, on the copy of the document he had with him. Will Duch keep that same equanimity when, once the heart of the debates is reached, he finds himself faced with the former S-21 deputy director or with some of his former victims who survived Tuol Sleng’s living hell?

The reading of the Closing Order painted a first picture of the situation which particularly prevailed at S-21and drew the outline of Duch’s role within the structure. Here are a few perspectives brought about by that document [The following quotes all come from the Closing Order issued by the co-Investigating Judges ]

Duch, director of S-21
With the accession of the Khmer Rouge to power, judicial institutions in Cambodia were replaced by centres for re-education, interrogation and security in which all supporters and representatives of Lon Nol’s Khmer Republic were sent together with all enemies to the Angkar. Duch explained, as detailed in the Order, that in 1976, “Pol Pot had eliminated the exploiting classes, private property, officials of the former regime, religions and teaching”. This is when internal purges started. The creed was to increase “revolutionary vigilance” with a view to "ensuring that the enemy is unable to bore from within" the Party and the Army. The revolution heightened with the escalation of the international armed conflict with Vietnam.

As early as 1967, Duch becomes a member of the Khmer Rouge communist movement. From 1971 till January 1975, he directs M-13, another security centre located in the Kampong Speu province, and is then “transferred” to S-21, which becomes operational in October 1975. His position is that of vice-chairman in charge of the group of interrogators. In March 1976, he becomes the highest-ranking official at Tuol Sleng. This does not prevent him from continuing to personally supervise interrogations of suspects, at least for the most important ones. Duch stated that to start with, he was reluctant to be appointed as head of S-21 and preferred an assignment with the Ministry of Industry. However, when he took command of S-21, he, by his own admission, understood, based on his experience at M13, that he was capable of performing this work better than his predecessor.

The feared and asserted authority
Duch ran S-21 “along hierarchical lines and established reporting systems at all levels to ensure that his orders were carried out immediately and precisely”. According to several witnesses, as stated in the Closing Order, “Duch was feared by everyone at S-21”. Besides the general rules of the Party in relation to the work of the secret security policy, he enforced strict rules which he devised himself for the operation of S-21 and selected his staff personally: former subordinates at M-13 to start with, and later children and adolescents whom he chose as guards since, “he said, [they] were ‘like a blank piece of paper’ and could easily be indoctrinated”.

Prisoners systematically “smashed”
“The primary role of S-21 was to implement ‘[t]he Party political line regarding the enemy’ according to which prisoners ‘absolutely had to be smashed’”, the Closing Order details. Every prisoner who arrived at S-21 was destined for execution. A simple transfer to that centre automatically established the guilt of the person and interrogators were then in charge of justifying arrest by extracting confessions of treachery. According to the Order, “Duch now maintains that he was, from an early time, sceptical of the veracity of the confessions, claiming that they were demanded from above”, adding that "[e]ven the Standing Committee, in my opinion, did not really believe in it". If the name of a person occurred several times in confessions, their fate would be sealed.

According to Duch, “the content of the confessions was the most important work of S-21”. Detainees were compelled to draft autobiographies in which they ended up denouncing themselves and others as traitorously serving the intelligence agencies of foreign powers: the United States CIA, the Soviet KGB and organs of the Vietnamese Communist Party. Duch “read, analysed, annotated and summarised the majority of these confessions for his superiors”.
A number of foreign nationals were also imprisoned at Tuol Sleng including Vietnamese (mainly), Thais, Laotians, Indians, and Westerners. According to Duch, no one could be sent to S-21 without a decision of the Party. He specified that he generally had no grasp of the specific rationale behind the imprisonment of persons. Duch, an enthusiastic element in the Khmer Rouge machinery, acknowledges he systematically reported his subordinates’ faults, which resulted in their arrest. “He claimed that he did this to avoid being implicated himself, since ‘everyone, fearing for their lives, surveyed everyone else’”.

“No one could escape torture”
Among tortures inflicted on prisoners, beating, electrocution, placing a plastic bag over the head, head immersion in water… And besides that, autopsies on living persons, blood taking and medical experiments were practiced on prisoners. Interrogation and torture sessions only ended when prisoners’ confessions were thought to be satisfying. Duch admitted that “anyone taken for interrogation mostly could not avoid torture”. Several witnesses have said that Duch would personally torture prisoners at M-13. Before the co-Investigating Judges, he always denied having tortured any prisoner at S-21. But several witnesses contradicted him and declared they saw him beating prisoners up. One of them said he saw Duch electrocuting a woman during an interrogation and added that he beat her “until he got tired”, whereupon someone else would interrogate her. Duch deemed the account pure fabrication. On a confession, Duch wrote “[N]ot yet confessed. To be tortured”.

The judicial investigation demonstrated that, “while Duch was not a senior leader of Democratic Kampuchea, he may be considered in the category of most responsible for crimes and serious violations committed between 17 April 1975 and 6 January 1979, due both to his formal and effective hierarchical authority and his personal participation as Deputy Secretary then Secretary of S-21”. Today, he is accountable for crimes against humanity, war crimes and national crimes before the Extraordinary Chambers in the Courts of Cambodia.