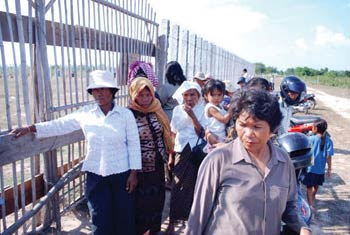 Photo by: Michael Fox
Curious onlookers gathered outside the house of the Siem Reap "killer family" who are said to have murdered dozens. Police have denied the reports.

Rumours of a family of mass murderers near Siem Reap have turned a quiet town into a popular attraction, but police say reports have exaggerated what really took place in Arak Svay.

RUMOURS of dozens of bodies buried in a backyard in a village near Siem Reap have spread through the city and made the home at the centre of the claims a macabre attraction.

Police, however, have dismissed the two-week-old rumours and said the case was almost complete.

The reports claimed that a family was using its beautiful daughters to lure moto drivers to a grisly death at a remote house in Arak Svay village, about 15 minutes from the city centre. The number of murders was rumoured to be as high as 90.

Sightseers were still arriving by car, tuk-tuk and motorbike on Monday; and a neighbour, Noum Coun, told the Post there had been a constant stream of visitors for over a week.

A local man, who would only give his name as Phamma, went to the house with a group of friends to find out for himself.

"I heard information from everybody and wanted to see the house and see the area," he said.

Vendors were also selling refreshments to visitors outside the house.

The small home now has a hand-written sign on the locked gate warning people to keep out.

Police said the gates were locked and guarded over fears that the now vacant property would be ransacked.

Curious crowds have also turned up at Angkor Pyong Yu on successive Sundays following rumours that a "bad family" of serial killers would be displayed in cages at the entertainment park and that there was a display of human remains that had earlier been sold as dog food.

People even turned up at the Siem Reap prison to buy tickets to view the family in their cell, but prison officials said tickets were never on sale and the family had been moved to the province's new prison.

Police said that only one person had been murdered and three people robbed. Three of the five alleged killers, all related, are now in custody.

Police arrested Keo Sophay, 48, and her two sons Chea Sophealy, 26, and Kong Samedy, 17, according to Rasmey Kampuchea. The two daughters are still on the run.

Deputy police chief of Siem Reap district Mak Sam On said the reports grew as they were passed on.

"There was only one man killed, Ream Rith, who was a friend of one of the family members, and he was killed on Valentine's Day. We found his body early in the morning of February 15 at Pyong Yu," he said, adding that the alleged killers were arrested on February 22.

Angkor Thom commune police chief Yom Yat told the Post on Friday that the victim had delivered flowers to the home on Valentine's Day before heading into Siem Reap with one of the daughters. When the duo returned to the house at 1pm, the man was killed with a machete.

Yom Yat said that the following morning people alerted police to a body in the bush at Pyong Yu, and when police investigated, they found the remains wrapped in linen.

The dead man's family identified the body and informed the police that the victim was last known to be visiting the girl in Arak Svay village.

Originally denied entry to the home, police returned with a warrant and found the stolen motorbike, hair from the victim and a bloody machete.

Mak Sam On would not speculate on a motive for the murder and said that as far as police were concerned, the issue was nearly complete.

"Our investigation is almost over as three people have been charged with premeditated murder and motorbike robbery and are now in jail.

We are continuing to look for the daughters."
Posted by CAAI News Media at 11:06 pm