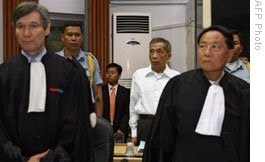 Kaing Kek Iev, standing behind his lawyers on Monday.
By Reporters, VOA Khmer
Original reports from Cambodia
30 March 2009
A former math teacher who came to be the head of a murderous Khmer Rouge prison system sat before a panel of trial judges on Monday, more than three decades after his regime fell and after years of worry none of its leaders would ever see a day in court.
The prison chief, Duch, 66, sat in the dock with a still face, listening closely before five judges of the Khmer Rouge tribunal’s Trial Chamber. The indictment included war crimes, crimes against humanity, murder and torture. During a three-hour opening day, Duch wore glasses and read along as the charges were read. He answered questions with a strong, clear voice.
Duch, whose real name is Kaing Kek Iev, was in charge of the now infamous Tuol Sleng prison, known to the Khmer Rouge as S-21, where traitors to the revolution and others were sent for torture and confession.
Once inside the walls of Tuol Sleng, prisoners were shackled to beds, kept in tiny cells, beaten, electrocuted, and made to confess crimes against the Angkar, the Organization.
“My feeling is very angry and very happy, mixed,” prison survivor Bu Meng, who was present at the court Monday, told reporters. “I am angry that Duch killed my wife. And I am very happy because the court is trying the Khmer Rouge leaders. Duch’s trial is very valuable for humanity around the world, and for Cambodians, and for me.”
An estimated 16,000 prisoners went through Tuol Sleng, a former Phnom Penh high school, before they were executed at a site on the outskirts of the capital, Choeung Ek, which was also administered by Duch, along with a second prison in Phnom Penh, Prey Sar.
Bu Meng, who was arrested in 1976 as an “enemy of the revolution” for his participation in the Lon Nol government, was released from the prison only when Vietnamese and Cambodian forces ousted the Khmer Rouge.
“I hope there will be justice in coming days,” he said.
Monday marked the most significant trial date so far for the tribunal, officially known as the Extraordinary Chambers in the Courts of Cambodia, or ECCC, which has been dogged by accusations of corruption and mismanagement.
Council of Ministers spokesman Phay Siphan said the trial marked “the end of impunity in Cambodia.”
The tribunal is currently holding four other former leaders of the regime: chief ideologue Nuon Chea, head of state Khieu Samphan, foreign minister Ieng Sary and his wife, former social affairs minister Ieng Thirith.
Each is facing charges for either for war crimes, crimes against humanity, or both. None is facing charges of genocide. Nearly 2 million Cambodians perished under the Khmer Rouge, officially called Democratic Kampuchea, from April 1975 to January 1979.
Kek Galabru, president of the rights group Licadho, said Duch’s trial “gives once again hope for justice to victims, who have been waiting 30 years.” She said she expected more former leaders to face indictments.
US Ambassador Carol Rodley, who attended the opening session, was “gratified that it’s proceeding, and in the following weeks and months we’ll monitor the ECCC closely,” embassy spokesman John Johnson said.
The US played a key role in forging a tribunal agreement between the Cambodian government and the UN. Initial negotiations began and faltered as early as 1997, started up again in 2003, and concluded in 2005. The court stood up in 2006, but was delayed by disagreements between international and Cambodian judges and prosecutors on internal regulations and other matters. Its first arrests came in 2007.
More than 500 people, ranging from international diplomats to young Cambodian students, as well as 200 journalists from around the world, attended Monday’s proceedings, the most significant session of Duch’s trial to date.
Phy Sophoan, a student from the Royal University of Law and Economy, said she expected the trial to “provide justice for the Cambodian people.”
Some observers expressed shock on seeing Duch, wearing a collared shirt tucked neatly into his pants, healthy, answering questions posed by judges.
“Duch is apparently brave, [but] he is not enthusiastic,” said Om Cheantha, a farmer from Kampong Cham who lost her husband and brother under the Khmer Rouge, in 1976. “But he killed several million people. We wish the courts will condemn him fairly, for the deaths of millions of Cambodians.”
To hear more reaction from people in Phnom Penh, click here.
To hear from family and neighbors around Duch’s hometownin Stung district,Kampong Thom province, click here.
To hear what people in the former Khmer Rouge zone of Samlot district, Battambang province, are saying, click here.
Posted by CAAI News Media at 8:21 am