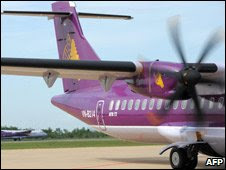 All Thai nationals working for an air traffic control company in Cambodia have been suspended from duty.

A Cambodian civil servant has been put in temporary charge, in the latest twist in the diplomatic row between Thailand and Cambodia.

The news comes a day after a Thai engineer working for the firm in Phnom Penh was formally charged with spying.

Relations between the two regional neighbours have deteriorated sharply in the past week.

The spat was prompted by a visit to Cambodia by the fugitive former Thai Prime Minister Thaksin Shinawatra.

But in effect, the Cambodian authorities have now taken control, barring all Thai employees from entering company premises.

The move is said to be temporary pending the outcome of a legal case against a Thai engineer who works for the company. 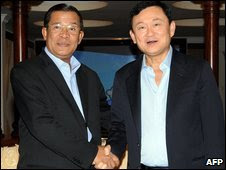 Cambodia has refused to extradite Mr Thaksin (r) to Thailand

He is currently under arrest, accused of passing the details of Thaksin Shinawatra's flight schedule to a Thai diplomat.

His presence across the border infuriated the Thai government, who claims he should have been extradited to serve a two-year jail term.

The former Thai prime minister was ousted in a coup in 2006, and subsequently found guilty in absentia on conflict of interest charges.

Local newspaper reports in Thailand suggest the current Thai government and Mr Thaksin are now competing to offer help to the detained engineer and his family.

It is an indication that this row is as much about the internal politics of Thailand as it is about cross-border rivalries.