Suthep: No loss of face if Thaksin helps release detained Thai in Cambodia 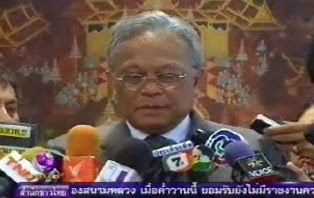 Some Thai media reported that Mr Thaksin had contacted Cambodian Prime Minister Hun Sen to free Mr Siwarak and that opposition Puea Thai Party chairman Gen Chavalit Yongchaiyuth will fly to accompany him back to Thailand.

Asked by reporters whether the move would be an attempt to upstage the government, Mr Suthep said the government is not working to show off.

He said after the arrest, Defence Minister Gen Prawit Wongsuwan was trying to contact Cambodian authorities for fair treatment of Mr Siwarak but he said the government must observe Cambodian sovereignty.

Mr Suthep added that the flight schedule should not be considered a secret information.

He said he had no report confirming Gen Chavalit's trip to Cambodia to bring Mr Siwarak back to Thailand but if true, the government would not consider it losing face as long as Mr Siwarak is safe. (TNA)