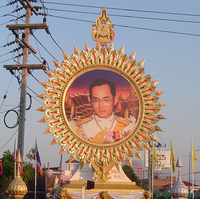 Gripped by simmering cross-border tensions, a dysfunctional democracy and collective unease over the health of the monarchy, Thailand has seen its status as a major power in Southeast Asia and its influence in the wider region cast under a harsh light recently.

The most recent political shockwaves to roll through the Bangkok establishment emanated from ousted Thai leader Thaksin Shinawatra, who having fled a jail term for corruption, continues to goad his enemies from exile -- this time by accepting a job offer from the Cambodian government as an economic adviser.

At a carefully stage-managed press conference last week, with the rest of the region looking on, Cambodian Prime Minister Hun Sen refused an extradition request from Bangkok authorities for Thaksin, offered him a home and a job, and hailed him as a great friend and economist.

But Hun Sen's stunt was also seen as a personal attack, designed to embarrass the English-born Thai leader Abhisit Vejjajiva and his government ahead of a series of major international conferences, including the Association of Southeast Asian Nations (ASEAN) and Asia-Pacific Economic Cooperation (APEC) summits.

Gavin Greenwood, an analyst with Hong Kong-based Allan & Associates, said Hun Sen likes to style himself as an old revolutionary fighter among soft-handed courtiers. "His contempt for Abhisit -- who he apparently views as a metropolitan, Western acolyte with no business in the neighborhood -- may have colored his judgment."

Bangkok recalled its ambassador as a result of Thaksin's appointment, Cambodia responded in kind, and in a tit-for-tat display of sand-pit diplomacy, hard-won agreements on oil exploration in the Gulf of Siam were torn up by the Thais, while troops at the disputed temple of Preah Vihear on the border went on full alert.

Chheang Vannarith, executive director of the Cambodian Institute for Cooperation and Peace (CICP) sees Abhisit -- who came to power after anti-Thaksin protesters effectively pushed the People's Power Party (PPP) from office last year -- as a short-term leader. "I'm still optimistic about bilateral relations between Cambodia and Thailand," he said, adding that "the PPP will win the next election and that means Thaksin and his supporters will be returned."

The elections are not the only reason that 2010 is shaping up to be a turbulent year for Thailand. Concern for the health of King Bhumibol Adulyadjej, who has ruled since 1946, is also paramount. In early November, looking frail and confined to a wheel chair, the revered monarch made his first public appearance since being hospitalized with a lung infection two months ago.

Crown Prince Vajiralongkom remains the heir apparent. His sister, Princess Sirindhorn, is next in line, while his fifth son, 4-year-old Prince Dipangkorn Rasmijoti from his third and current wife is also a contender. Discussing succession, however, is problematic. Any public comment that can be interpreted as an offense against the dignity of the monarchy risks charges of lèse Majesté, punishable by a three- to-15-year jail term.

"The monarchy is in turmoil and the future is uncertain, some people have even suggested a republic," Chheang of the CICP said. "And Thailand has a conflict going on with every one of its neighbors."

Analysts said that by appointing Thaksin as his government adviser, Hun Sen was attempting to acquire leverage in relations with Thailand -- a risky gambit based on three calculations.

Hun Sen intends to use Thaksin's business acumen to attract foreign investment to Cambodia, while at the same time sharpening the political rifts and divisions that exist within the Thai government. Finally, by shifting the focus of Thai-Cambodian relations from the territorial dispute at Preah Vihear to political issues, he hopes to force a rethink in Bangkok on bilateral relations.

However, analysts warned that Hun Sen and Thaksin may have miscalculated, and that the excessive goading might prove a winner for Abhisit at the ballot box.

"Hun Sen is moving strongly against his neighbor, which of course has been a sworn enemy of Cambodia for centuries," said Keith Loveard, a regional security analyst with Jakarta-based Concord Consulting. But he added that "the move could be counterproductive . . . possibly tipping the scales toward the conservatives in Thai politics and away from Thaksin, simply because of animosity against Cambodia."

Those sentiments were echoed by Greenwood. "If Hun Sen sees Thaksin's return to power in Thailand as a reason to offer him work and sanctuary, then I think he is either delusional or extremely badly informed," he said. "Thaksin has absolutely no chance, in my view, of recovering his political mantle in Thailand."