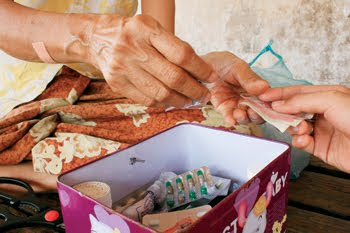 A woman accepts money for medication sold out of a box on the steps of her home outside Phnom Penh earlier this year. Cambodia is still struggling to curb the sale of counterfeit drugs.

CAMBODIA is fast becoming a focal point for regional traffic in counterfeit medication, experts warned on Wednesday at the opening of a three-day seminar.

Organised by the French embassy, the event is focused on eliminating counterfeit drugs from the Mekong sub-region. “Around the world, US$70 billion is spent every year on counterfeit drugs, which kill thousands of people who unknowingly ingest them,” French Ambassador Jean François Desmazieres said in the opening address.

Researchers have found that counterfeit and substandard medicines are bolstering the drug resistance of malarial parasites and in some cases have triggered adverse – even fatal – reactions.

“Cambodia is becoming a hub for regional traffic in counterfeit drugs,” said Anne-Lise Sauterey, coordinator of Southeast Asia illicit trade watchdog The Observatory. Of particular concern is the spread of fake antimalarial drugs, which she described as particularly severe in the Mekong sub-region and indelibly linked to the trade in illegal substances.

“A survey of regional malaria medications found that 50 percent were counterfeit,” she said, noting that the fake drugs were stamped with 80 different varieties of counterfeited verification holograms. Analyses of fake medicine seized in Cambodia between 2007 and 2008 detected the recurring presence of saffrole and metamizole, both precursor substances in the production of methamphetamine.

As much as 30 percent of medication on sale in developing countries is fake or substandard, according to William Mfuko, a technical officer at the World Health Organisation in Cambodia. Pharmacies operating without licences are often to blame, and the government has closed more than 1,000 of them since 2005.