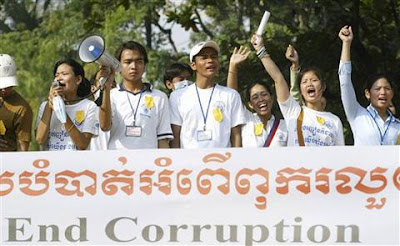 Cambodian Non Governmental Organizations workers shout slogans during a demonstration in Phnom Penh.
The council members “are the officials from the ruling CPP who cannot eliminate corruption in the government."
The nascent national Anti-Corruption Council opened its first meeting Tuesday, selecting its president and vice president and calling the official declaration of assets the first order of business.
The 11-member council, a policymaking and standards body, was formed as part of a new anti-corruption law that critics worry won’t have teeth to combat Cambodia’s rampant corruption.
The council chose Top Sam, 63, as president and Prak Sok, 67, as vice president. Both are former members of the Constitutional Council and members of the ruling Cambodian People’s Party.
Om Yentieng, a council member who is also the head of the Anti-Corruption Unit, told reporters that the first work of the council will be to determine assets of officials.
The ACU will be in charge of investigation and operations, he said. “The National Anti-Corruption Council does not interfere in the work of the Anti-Corruption Unit.”
Some members of the opposition and development organizations said Tuesday’s meeting did nothing to allay fears the anti-graft bodies will seriously tackle the corruption that costs Cambodia millions of dollars a year.
The council members “are the officials from the ruling CPP who cannot eliminate corruption in the government,” said Yim Sovann, a lawmaker and spokesman of the opposition Sam Rainsy Party.
However, Top Sam said the council was committed to the new law, telling reporters, “You all should wait for the result of the implementation of this law.”
And Om Yentieng admitted the work would be “very difficult, particularly [finding] evidence of corruption,” but he added, “We cannot retreat.”
Other members of the council include Som Kimsour, Minister of National Assembly and Senate Relations; Keo Remy, secretary of state for the government’s Human Rights Committee; Chan Tany, secretary of state for the Council of Ministers; Suy Mong Leang, head of legal and judicial reform; Heng Vong Bunchat, head of legal council; Uth Chhon, president of the National Auditing Authority; Chiv Keng, head of Phnom Penh Municipal Court; and Kuy Sophal, a senior official for the Royal Palace.
Posted by CAAI News Media at 2:41 pm