US Investors on Landmark Visit To Cambodia 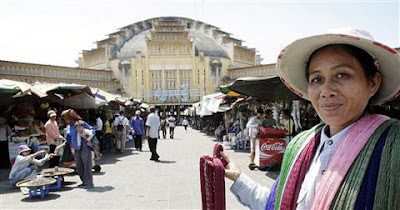 A Cambodian woman offers hammocks for tourists outside central market in Phnom Penh, Cambodia.
“There is also the potential for modernizing Cambodian rice production, which the US should consider investing in.”
A large group of US investors are in Cambodia this week in a sign that more American businesses want to move into the country’s marketplace.
The delegation, led by US-Asean Business Council, aims to learn more about the market and represents the biggest delegation ever organized by the group.
Chevron, Bunge, ConocoPhillips, General Dynamics, General Electric, Johnson and Johnson, IBM, and JP Morgan will all take part.
“We have companies from a wide range of sectors, and there are companies that have been established there for quite a while that have quite a presence there already,” Anthony Nelson, a spokesman for the US-Asean Business Council, told VOA Khmer ahead of the trip. “There are some companies that are just starting there, and there are companies that are looking to see what kind of opportunities exist in Cambodia.”
For General Dynamics, a defense industry contractor, the trip is a first.
“This trip is for familiarization purposes,” company spokesman Rob Doolittle said. “There is no area of particular interest that we have identified at this time.”
The team is scheduled to meet senior officials at the Council of Ministers, the ministries of Finance and Trade, and the Council for the Development of Cambodia.
Cambodia could be especially attractive to technology investors, Pan Sorasak, secretary of state for the Ministry of Commerce, has said.
“There is also the potential for modernizing Cambodian rice production, which the US should consider investing in,” he said in an earlier interview. “And there is tourism, where we can have cooperation among airlines.”
Cambodia runs a heavy trade imbalance with the US, which imports about $2 billion in goods each year while exporting only about $200 million.
Earlier this year, Cambodia was removed from a trade blacklist by the US administration, making more investment more likely.
Posted by CAAI News Media at 2:43 pm