AFP - Human Rights Watch on Tuesday urged countries across the Middle East to end forced labour brought by visa sponsorships that the watchdog said have become a gateway for human trafficking. 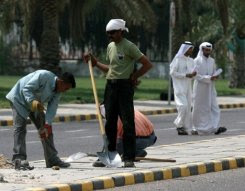 Asian labourers work in a street in Kuwait City in 2008. Human Rights Watch has urged countries across the Middle East to end forced labour brought by visa sponsorships that the watchdog said have become a gateway for human trafficking.
"For efforts to end forced labor and human trafficking to be successful, governments in the Middle East should reform the current visa sponsorship system," said Nisha Varia, a senior researcher at the New York-based HRW.
"When employers have near-total control over migrants? ability to change jobs, and sometimes to leave the country, workers can get trapped in exploitative situations in which they are forced to work without wages, get beaten, or face other abuses," she said in a statement.
The appeal came as the US State Department's annual human trafficking report released on Monday ranked several Middle Eastern countries in its two lowest possible categories.
It maintained Saudi Arabia and Kuwait in tier 3, the lowest possible category, which makes these countries potentially subject to US sanctions of non-humanitarian aid.
It also placed Lebanon and Qatar on the tier 2 watchlist, the second-lowest ranking.
Millions of migrant workers, mainly from Asia and Africa, have short-term employment contracts for low-wage jobs in the construction, domestic work, and service industries across the region, said HRW.
The sponsorship system, locally known as "Kafala," is mostly prevalent in energy-rich Gulf Cooperation Council states which are home to at least 12 million foreign workers, many of whom complain of maltreatment.
In April, UN High Commissioner for Human Rights Navi Pillay called on Gulf countries to stop requiring migrant workers to secure local sponsors, saying the system fosters abuses.
"I wholeheartedly support those efforts and call on other states to replace the Kafala system with updated labour laws that can better balance rights and duties," she said in a speech in Saudi Arabia during a Gulf tour.
Saudi Arabia, the United Arab Emirates, and Jordan have adopted anti-trafficking legislation, and in some cases built shelters, HRW said.
Other countries, including Lebanon and Kuwait, have yet to adopt such legislation, and most countries retain immigration laws that penalise rather than protect workers who work under conditions of abuse, it said.
In Kuwait, immigration regulations allow for criminal charges against workers who leave their jobs, while in Saudi Arabia and Qatar workers must have their employers? permission to get exit visas to leave the country.
Posted by CAAI News Media at 1:55 am