Cambodia: Breakdance arrives on the streets of Phnom Penh 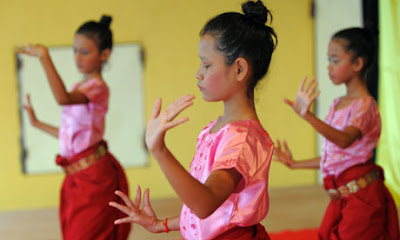 Traditional Cambodian culture. Photograph: Tang Chhin Sothy/AFP
Lithe and limber with the joints of a marionette, "Floater" lets it rip around the linoleum mat laid on the pavement. To the beat of a 1980s American hip-hop remix from a boom box, the Cambodian kid, real name Chea Sokchen, 15, transforms into a whirlwind of twisting hips and twirling limbs. After rotating on his palms in his trademark "float," he drops into a "windmill," spinning around his torso with his legs stabbing the air in a V shape.
His fellow b-boy breakdancers whoop and cheer in the throng of spectators gathered to watch this improvised Sunday afternoon dance battle in a park opposite Phnom Penh's Grand Palace, with its sandstone sculptures of traditional Khmer apsara dancers.
In wordless pantomime, the youngster then challenges a sinewy man covered in gangland Goth tattoos to a duel. Sobil Tuy, aka KK, is game. He launches into gravity-defying rhythmic acrobatics, his ponytail flogging the air. Slumping to the ground, wheezing, he makes way for another adolescent dancer. Tuy gave up drugs long ago, but his daily three packets of cigarettes still take their toll.
An erstwhile stalwart of the notorious Crips gang in southern California, Tuy dropped out of primary school. Convicted of armed robbery, he spent the next decade in and out of American jails and immigration detention centres before being deported to Cambodia in 2004 by the US government.
It was no homecoming for Tuy, who was born in a refugee camp in Thailand in 1977 during the genocidal reign of the Khmer Rouge, and taken to the US as a toddler. Rather, he found himself exiled for life to a land that he had never seen.
But once there he metamorphosed into an unlikely guardian for orphaned and destitute children from across Phnom Penh's slums.
"First we were afraid of him," Floater admits, "but KK looks after us like a big brother." Floater adds with zeal: "I don't want to be just a street kid. I want to become a professional b-boy."
Tuy, who insists he's learned his lesson, wants to save his Cambodian proteges from the kind of dead end his own life took so far away. "I made a mistake as a kid," he says. "But I'm not gonna let these kids destroy their lives too."
Posted by CAAI News Media at 11:04 pm

Make sure you only use clean balls for playing on
indoor simulator.

These originally were quartz crystals from the River Rhine in a region noted for gem-cutting, particularly the town of Idar-Oberstein.

The End of Military Flight Sim Pro With this program you can take
advantage of the military aspects of the game, landing and takeoff of an airplane taking includes carrier.
However, if you'd like to take the scenic route through Google Earth, the SR22 is a better choice. Retain on your own and these you enjoy in the gaming.