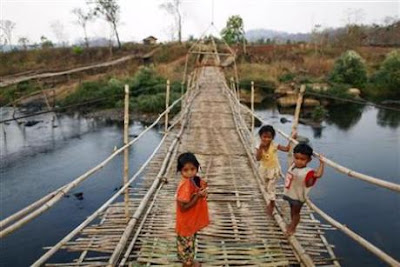 Children cross over an improvised bridge in the village of Phnom Dambang where around 95 percent of people suffered from malaria, according to a local health care worker near Pailin in western Cambodia January 28, 2010.
Credit: Reuters/Damir Sagolj
(Reuters) - The World Health Organization, governments and nonprofit groups are saving lives by distributing drugs to developing countries, but they are not paying enough attention to the dangers of drug-resistant bugs, according to a report released on Tuesday.
Many such drug distribution programs may be driving drug resistance and endangering the lives they are meant to save, according to the report from the Center for Global Development.
"Drug resistance is a natural occurrence, but careless practices in drug supply and use are hastening it unnecessarily," the Center's Rachel Nugent, who led the group writing the report, said in a statement.
Millions of children in the developing world die every year from drug-resistant strains of malaria, tuberculosis, AIDS and other diseases, the report found.
Since 2006 donors have spent more than $1.5 billion on specialized drugs to treat resistant bacteria and viruses, and this could worsen, the report cautions.
So-called "superbugs" such as methicillin-resistant Staphylococcus aureas, or MRSA, now cause more than 50 percent of staph infections in U.S. hospitals.
Bacteria and viruses begin to evolve resistance to drugs almost as soon as they first encounter them. If drug treatment leaves even one microbe alive, it will reproduce and whatever genetic attributes helped it survive will be multiplied in the next generation.
Last week, experts told a Congressional panel that U.S. regulators need to provide a clear path for drug companies to develop new antibiotics and should consider offering financial incentives.
The Center's report looks for even broader action, urging WHO to lead others, including pharmaceutical companies, governments, philanthropies that buy and distribute medicines, hospitals, healthcare providers, pharmacies and patients.
The report finds clear links between increased drug availability and resistance. For instance, in countries with the highest use of antibiotics, 75 to 90 percent of Streptococcus pneumoniae strains are drug-resistant, it found.
Poor quality drugs, counterfeit drugs, incomplete use of drugs and other factors all contribute to the problem, the report found. And this problem will worsen as drug access programs succeed, it cautions.
"The number of people being treated for HIV/AIDS, for example, increased 10-fold between 2002 and 2007; there was an 8-fold rise in deliveries of (drugs) for malaria treatment between 2005 and 2006, and the Stop TB Partnership's Global Drug Facility has expanded access to drugs for TB patients, offering nearly 14 million patient treatments in 93 countries since 2001," the report reads.
"While increased access to necessary drugs is clearly desirable, it brings challenges in preserving the efficacy of these drugs and ensuring they are used appropriately."
For instance, in 2008, an estimated 440,000 cases of multi-drug resistant tuberculosis emerged.
The Center for Global Development, an independent, nonprofit group, specializes in research on global poverty and inequality.
(Reporting by Maggie Fox; Editing by Paul Simao)
Posted by CAAI News Media at 1:59 am