No compensation from property developers for Cambodians 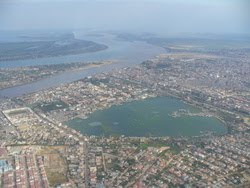 More than 4,000 families are about to lose their homes in Phnom Penh, Cambodia because of a development arrangement.

People in villages around Lake Boeng Kak have been told a real estate development in a lake will require long-term residents to move out.
The lake dwellers have been warned their lack of land title will mean the largest real estate development scheme in the country, covering 133 hectares, will take over the area.
Shukaku, a company linked to Lao Meng Khin, a senator with the ruling Cambodian People’s Party, is in charge of the project.
Residents, who do not know how to oppose the move, are resigned to having to move on, although plans are afoot for human rights groups to ask for foreign donations to fight the development.
Lake dwellers have claimed historic use of the land, saying when the Khmer Rouge regime was in charge, most of Phnom Phen’s population was forced to leave the city.
When the regime was ousted, people came back and took over vacant land on the lake.
Until now, no one had challenged their right to be there.
The forced seizure has come about because the dwellers lack proper title documents, a problem shared by most Cambodians.
Posted by CAAI News Media at 3:03 pm