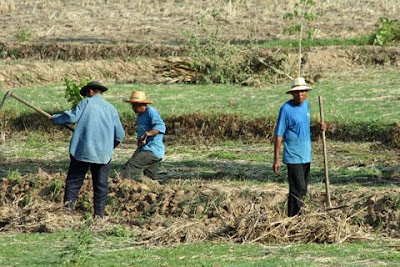 Photo: VOA - A. Belford
Farm workers in a field near the city of Udon Thani, a rural stronghold for anti-government protesters
Thai authorities have for now subdued anti-government protesters from the countryside who occupied parts of the capital for two months. A military crackdown ended the demonstrations, but not before more than 80 people died, most of them protesters.
In their stronghold of Udon Thani in the northeast, protesters have not given up their demands for new elections and justice for those who died.
Paeng Lam Saleeto sits on the floor of her modest home in Udon Thani, listening to a radio debate by politicians in Bangkok about last month's violence. She says she does not understand everything they are talking about, but it is clear to her that both sides, the government and the opposition, are just bickering.
Beside her is a framed picture of her 32-year-old son, one of several Red Shirt protesters killed on May 19 when soldiers cleared them from Bangkok. She says she supported her son because he was defending democracy and demanding fair government.
But then his body was found in a Buddhist temple in the protest camp that was thought to be safe from the clashes. She says she does not want any of her children to protest any more. She did not realize there would be killing. Otherwise, she says, she would have stopped him.
Starting in March, thousands of Red Shirt protesters occupied central parts of Bangkok, blocking major roads and forcing hundreds of businesses to close down. After the deadly May 19 crackdown, during which angry protesters set more than 30 buildings ablaze, the government promised an independent investigation. Still, officials say most of the violence was the work of "terrorists" among the protesters.
Here in the Red Shirt heartland, there is little trust in Bangkok authorities, whom the protesters say removed their elected representatives from power.
Under emergency law, the government is cracking down on Red Shirt media and activities. Government officials say they are working to prevent more violence, but also are embarking on a long-term plan to reconcile the politically divided nation and address protesters' concerns about income inequality and holding new elections.
Retired policeman and political organizer Kamolsil Singhasuriya has already been questioned by authorities and says the Red Shirts are under intense pressure. He says another movement is bound to start once the emergency degree is lifted. But he said it will be a non-violent democracy movement.
After last month's crackdown, hundreds of protesters in Udon Thani set fire to government buildings and vehicles. The old city hall building was gutted. Its teakwood floors have been reduced to ashes.
In the parking lot are the burned remains of a few fire trucks. Security guards armed with M16 rifles now patrol the area. Police and security guards here say they have friends and family among the protesters and they are concerned that despite the current calm, unrest could quickly return.
Chouchart Klinchan, a security guard at the old city hall, says despite their sympathies, the guards are on high alert. He cites rumors that predict more unrest in about two months because protesters are still angry and may want to take further action against the government.
Authorities have extended emergency rule until July, but say under the government's reconciliation plan, elections could be held early next year. Red Shirt supporters in Udon Thani say they are willing to wait for elections. But many also say if the probe into the protest violence is one-sided, the country's divisions will only deepen.
Posted by CAAI News Media at 2:54 pm