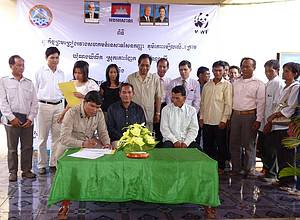 With support from WWF, the signing ceremony was organized by the Fisheries Administration Cantonment at their office in Sen Monorom town and was attended by 60 participants from the Provincial Governor's Office, Fisheries Administration, Sen Kangha Community Fishery, WWF and many other local authorities.
His Excellency Chan Yieun, Governor of Mondulkiri, who presided over the ceremony, encouraged effective implementation of the agreement and urged all members of the Sen Kangha Community Fishery to sustainably manage and conserve fish stocks for long term benefit.
"I would like to ask all relevant authorites, especially the Fisheries Administration Cantonment, to cooperate with and provide support to the Sen Kangha Community Fishery in effectively implementing the Fisheries Law, National Strategy on Fisheries Management and other fishery-related regulations," the Governor said as he was delivering the opening speech at the event.
Rapid population growth and illegal fishing practices have led to over-fishing and falling fish yields. Due to the high dependency on fisheries for local livelihoods and food security, the Forestry Administration in collaboration with WWF, have been supporting the establishment of the Sen Kangha Community Fishery since 2007.
"With decreased fish yields observed over the past years due to illegal fishing activities, local communities are worried about potential disappearance of some fish species," said Mr Moul Phath, WWF’s Provincial Conservation Planning Specialist.
The community fishery provides an opportunity for people in Koh Myeul Leu and Koh Myeul Krom villages to conserve fish resources for their long term benefit.
In his speech, the Governor also highlighted that many of Mondulkiri's important zones of natural fish stocks, especially in Koh Nhek district, could, if managed sustainably, supply enough fish to meet the provincial consumption, as well as support other people living at the border of Ratanakiri province.
For more information, email to asnarith.tep@wwfgreatermekong.org
Posted by CAAI News Media at 11:28 pm

I've read a few just right stuff here. Certainly price bookmarking for revisiting. I surprise how much attempt you set to create this sort of magnificent informative site.

you are actually a excellent webmaster. The website loading speed is incredible.
It kind of feels that you are doing any distinctive trick.
Also, The contents are masterwork. you have performed a fantastic task on this subject!

I do not even know how I ended up here, but I thought
this post was great. I don't know who you are but certainly you're going to a famous
blogger if you aren't already ;) Cheers!

Thank you for the auspicious writeup. It in fact was a amusement account it.
Look advanced to more added agreeable from you! By the way, how can we communicate?

I've been surfing online more than 3 hours today, yet I never found any interesting article like yours. It's
pretty worth enough for me. In my opinion, if all webmasters and
bloggers made good content as you did, the internet
will be a lot more useful than ever before.

Fantastic beat ! I would like to apprentice while
you amend your web site, how can i subscribe for
a blog web site? The account helped me a acceptable deal.
I had been tiny bit acquainted of this your broadcast provided bright clear idea

Attractive section of content. I just stumbled
upon your web site and in accession capital to assert that I acquire in fact enjoyed account your blog posts.
Anyway I will be subscribing to your augment and even I achievement you access consistently quickly.

Quality content is the important to invite the visitors to pay a
quick visit the site, that's what this web page is providing.